DAVID A. BRENSILVER is a newspaper editor, and a fellow ENC Press author.

During this week of Steve Irwin's well-publicized death, David's novel "ExecTV", (which is available through our publisher: http://www.encpress.com/TV.html) is more timely than ever. I highly recommend it.

I asked him to please put down his smokes and write a piece for the blog. He graciously agreed...

"The view from the Coliseum"


We are voyeurs all, would-be emperors growing big on a diet of what is fed us. We hunt no more, for we sit in our own Coliseums, watching our own devoured figuratively by the Kings of the Television Jungle, our appetites sated only briefly, for we know there is more to consume.

This week the world mourns what we are told is a great and terrible tragedy, the death of the so-called Crocodile Hunter who was taken from us while we were not watching. Steve Irwin was not to die like this. He was to die a slow, bloody death, watching his own limbs torn off by the very reptiles he so desperately wanted us to understand.

We understood, Mr. Irwin, and you knew that. You knew that images of you holding your infant son mere feet (meters in your case) from the jaws of a large and hungry crocodile would cause frustration disguised as outrage, frustration that some real and ugly tragedy did not befall your child before our high-definition eyes, damning you for providing the spectacular but not ourselves for watching.

You could have given us what we wanted but didn’t have the balls. Had you died the way we expected you eventually would, news and entertainment, or news-as-entertainment, would have synchronized as they are supposed to.

Still, the 24-hour cable television news outlets analyzed stingray behavior for us, just as they had John Mark Karr’s handwriting and the meal he was served during his flight from Thailand.

And just as you let us down by dying an unseen and unspectacular death, Mr. Karr let us down with his innocence. He is no choir boy, to be sure. But we prayed to the Kings of the Television Jungle that it was he who killed JonBenet a decade ago, and that it would be he upon whom we would levy our vengeance.

We would have watched as he was sentenced to death and we would have cheered the jury, for they would have represented we, the people, in our upholstered Coliseums, armed with the technology to rewind and replay the verdict as many times as our high-definition eyes and sound-byte-trained ears could stand.

Your execution would have been broadcast live, for all the world to see. The fruition of what we’ve been threatening to arrive at but haven’t had the balls: a return to public executions.

And until you were put down, we would have waited. Your legal defense team would have used familiar rhetoric to stir debate about your sentence and looked good doing so in high-definition. Experts would have been paraded onto 24-hour cable television news sets to talk about your impending execution and would have thrown a bone to conspiracy theorists by suggesting you looked so much like Lee Harvey Oswald that it couldn’t be coincidence.

And in the end, we would have watched one of our own get fed to the lions, while we imbibed the sweet elixir of schadenfreude in the comfort of our hard-wired Coliseums.


In David A. Brensilver’s ExecTV (ENC Press, 2005) Reality TV is brought to its logical extreme when an unemployed documentary filmmaker arranges to have an execution broadcast live, on pay-per-view television. Find out more about David, ExecTV, and ENC Press here: www.encpress.com
Posted by Rick Kaempfer at 12:04 AM 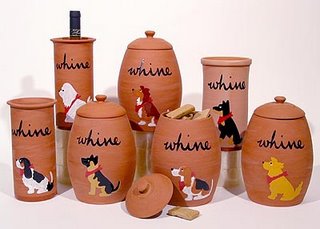 
You know those little moments that irk you, that get your blood pressure boiling for no good reason, that make you grit your teeth and pretend you aren’t incredibly irritated? You don’t say anything because it’s obvious that whatever is bothering you is your problem—not anyone else’s—and why should you bother other people with something that is probably just a pet peeve?

Ah, but there’s your mistake. A glass of fine whine goes with any dish. When you get a taste for it, stop by and visit one of us. Our whine cellars are particularly well-stocked.

For instance, we have nine fine whines to get you started. All of these are served in the supermarket.


1. Bagger or cashier small talk
Here’s the drill: we’re buying the stool softener for our wives. Capice? It's not a conversation starter, it's a conversation ender.


2. Understocked Kid Shopping Carts
You know those cool shopping carts that are shaped like fire trucks or police cars? Well it would be helpful if you had more than ONE. Our screaming toddlers don't understand the logic of having only one in the store and neither do we.


3. Extra-Value Products
Don’t ask us to buy some “extra value” product at the checkout. We’re smart enough to know that you’re just trying to move old inventory. Gee, who would have thought the mushroom flavored gum wouldn’t sell? And while the Peach-Mint Pop Tarts look yummy, we'll just pass thank you very much.


4. Deli-Counter Judging
We shouldn't have to acknowledge the irony when we're ordering three pounds of low-fat hard salami. Just get it. Yes, we realize that nobody else orders the head cheese, but it's not necessary to tell everyone standing behind us. We don't appreciate the snickers when we order the pickled herring, either. You work at a deli counter. There should be no such thing as a ridiculous meat order.


5. Half-Empty Bags of Chips
OK, so the cost of chips has only gone up slightly in the past few years, but apparently the cost of air is going through the roof. Put some damn chips in the bag.


6. This is not the arctic
We’re not penguins; you don’t have to keep the store at 15 degrees in the summer. We didn't bring our parkas.


7. The "We card everyone under 40" sign
It's impossible not to take that sign personally when we never get carded. Yes, we know we are technically over 40, but there's no way you could tell that by looking at us. We look exactly the same as we did in college.


8. Self Checkout Lanes should actually work
When we use those self serve checkout lanes we’re doing it to avoid human contact. So, it would be helpful if every time we used them there wouldn’t be some issue that needed a clerk’s attention.

9. Oversized produce baggies
I could fit five watermelons in these bags. How about a normal size plastic bag for someone that doesn't need to buy produce for an entire football stadium crowd?


If you have any others to add to our list, feel free to contribute by clicking on the word "comments" below. All comments are sent to Rick's e-mail directly and he prints the best ones in Friday's column.


To read any previous Half Empty columns, click here: http://halfemptyarchive.blogspot.com
Posted by Rick Kaempfer at 12:03 AM


I’ve given a few speeches to suburban high school kids about the challenges of succeeding in life as a “creative.” I can see the doubtful looks in their eyes when I tell them there is no reason it can’t happen to them. They think that living in the suburbs is somehow depriving them of the kind of environment necessary to create art.

Of course that’s ridiculous, but sometimes kids need to see real life examples around them to realize the possibilities. It’s only natural to think that living in the big city is necessary when you see how many famous and talented people come from a place like Chicago. What suburban kids don’t fully appreciate, however, is that many of these people who are identified as “Chicagoans” are actually suburbanites just like them.

How can a suburban kid from the Chicago area ever become a comedian or comic actor? It’s not possible, unless of course you consider the success stories of Jack Benny (Waukegan), John and Jim Belushi (Wheaton), Bill Murray (Wilmette), Harold Ramis (Glencoe), Andy Dick (Joliet), Andy Richter (Yorkville) or Sean Hayes (Glen Ellyn).

How can a suburban kid from the Chicago area ever become a rock star? Ted Nugent (Arlington Heights), Jim Peterik (Berwyn), Liz Phair (Winnetka) and Billy Corgan (Glendale Heights) managed to do it.

A writer? The former Wheaton teenager Bob Woodward broke a fairly big story in the 70s, if I recall. Also, I haven’t heard of this guy named Hemingway, but Oak Park residents tell me he was pretty passable in his day.

When you’re a teenager, the suburbs may seem like a pretty boring place, but it’s certainly not holding anyone back. The truth is that most people don’t go into these high profile creative professions, and for those who don’t, the quality suburban school systems are providing the kind of education that is crucial. But even if your child finds the arts calling his name, and he decides he simply must pursue his dream…the trail has already been blazed by people who were just like him when they were teenagers.

Absolutely everything is possible. Even for suburbanites.

Are you telling me that growing up in Mt. Prospect, “Where friendliness is a way of life”, somehow hampered surly former Cubs slugger Dave Kingman? NO! He overcame that friendliness to be one of the biggest jerks on the planet.

Would you claim that a suburban kid from Lyons Township High School shouldn’t try to become the biggest recording star in Germany? Well, David Hasselhoff must not have gotten that memo.

Do you pity the fools in Lake Forest who told Mr. T. to go away just because he chopped down hundred year old suburban trees? Mr. T. didn’t end up on the B-team, folks. He ended up on the A-Team.

Would you claim that a suburban kid could also never make it in Washington? Tell that to the Senator from Park Ridge, Hillary Clinton, or the Speaker of the House from Yorkville, Dennis Hastert. Tell that to former Winnetka teenager Donald Rumsfeld. They might just disagree with you.


Just because you live in the suburbs, and you eat dinner at a non-descript corporate owned Applebee’s, and you shop at a generic corporate owned Gap, and you drink coffee at your local corporate owned suburban Starbucks, doesn’t mean you can’t become an artist, a movie star, a television star, a writer, a rock star, or even a politician. To the contrary; it’s good training.

Those corporations and other corporations just like them also own any and all outlets that will ever pay you money for your art if you want to make it in Hollywood or New York, or finance your campaign if you ever want to make it in Washington. If you can function in the suburbs, you have no idea how well that prepares you to succeed in the world today.

In fact, that should be in every one of our brochures.


If you'd like to read previous Suburban Man columns, click here: http://suburbanmanarchive.blogspot.com
Posted by Rick Kaempfer at 12:07 AM