Half Empty: A letter to Commissioner David Stern

We sent the following letter to the NBA Commissioner a few weeks ago. We're still awaiting a response to Dave's gracious offer.

I’m worried about you. Here it is, July, basketball’s off season—and you still show up to work every day.

What if I told you that I could make that happen?

You see, my name is also David Stern. If you hired me to sit in your office for the summer, you could have the entire summer off, and nobody would be deprived of spending some quality time with David Stern.

If someone called to speak to David Stern, they could still do so…without inconveniencing you.

If someone stopped by to have a meeting with David Stern, they could still do so…without inconveniencing you.

If someone booked David Stern to deliver a speech at the National Press Club…David Stern could still do so, without interrupting your trip to Cape Cod.

Think about the possibilities. How much would your wife love it if David Stern actually picked out her gift? How honored would NBA players be if David Stern showed up at their weddings? I don’t like to brag, but have you considered how nice it would be to have everyone talking about what an incredible dancer David Stern was at Dwayne Wade’s wedding?

While I don’t look like you, I am also a relatively short Jewish guy. Nobody would be the wiser. Please give it some thought.


If you'd like to read previous Half Empty columns (including our letters to Barbara Walters and President Bush), click here: http://halfemptyarchive.blogspot.com

We'd also like to thank the the morning show (Steve & Joey) at 9-FM in Chicago for reading our previous Half Empty column: "Questions You Should Never Ask Your Husband" on the air this week. You can find that article in the Half Empty archive too.
Posted by Rick Kaempfer at 12:03 AM 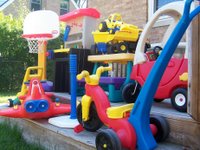 I have three young sons and lots of relatives, which means that our home has been “collecting” toys five times a year: three birthdays (March, September & October), Christmas, and Easter.

The general collection of our toys, while prodigious, is still not necessarily worthy of mention. Believe me, I’ve seen homes that have double and triple the number of toys we have. It’s a very specific type of toy we’ve accumulated that inspired this column: Little Tikes.

Little Tikes isn’t the only manufacturer of this specific type of toy (pictured above), but they're the industry leader. We started getting Little Tikes toys when my oldest son was a toddler. That was nine years ago, and every year our relatives gave us more.

It happened slowly and stealthily, but one day we suddenly noticed that we had accumulated a huge collection. How huge? Let’s just say that “Little Tikes” is the most ironically named company in the world.

They make GIGANTIC toys: Adult-size toys for tiny children. Tool benches the size of actual tool benches, cars the size of real cars, and play houses the size of three bedroom homes. We’re lucky we have boys. The castles they make for princesses are even bigger. My friend has Buckingham Palace in his backyard.

And while many parents complain that these gigantic toys are too big, we have a completely different take on it at our house. This HUGE collection has actually been a financial boon to our family. Not because it’s valuable, mind you, but because of the incredible incentive it provides us to save money. We have no choice. If we get one more of these toys, we’ll have to move into a bigger home.

I’ve been reading the stories in the news over the past few years about teardowns and bigger homes. Experts have attributed this nationwide trend on many things, but nobody has caught on to the real reason. It’s not a matter of keeping up with the Jones’. It’s a matter of keeping up with the HUGE toy collection. Ordinary single-family homes built in the 40s, 50s, and 60s, can’t sustain even a “little” collection of Little Tikes.

I know what you’re thinking: sell them at a garage sale. While that sounds good in theory, it won’t work in our neighborhood because everyone else has the same toys stuffed into the same size homes. We could give them away to needy children, but their homes are probably even smaller than ours. We could give them away to rich children with big homes, but my guess is that they aren’t having a difficult time filling their homes either.

So, instead of dwelling on the negative, I'd like to thank Little Tikes.

Thanks to the incentive your gigantic toys have provided us, we have saved more money the past few years than we ever could have imagined. Within ten years or so, we’ll be able to afford that bigger house.

The boys can visit us there when they come home from college.


This was originally written last summer as a Suburban Man, but it also appeared in Lake Magazine.