First things first: neither of us is planning on going to jail.

Have you heard the phrase “he’s not built for prison?” That phrase applies to us. We have no desire to join the other fellas in the old cell block dancing to the Jailhouse Rock. It’s one of the great motivating factors keeping us from breaking the law.

On the other hand, we must admit we’ve thought about what life would be like behind bars. We’ve seen enough prison movies and television shows, and read enough stories about what can and often does happen in jail. Plus, with politicians getting indicted left and right this year, it's top of mind. And because we are sick and twisted, our brains have been unable to stop ourselves from considering the following circumstances.


1. The last second call from the governor
What if the phone rang just before the execution, but it wasn’t exactly what the prisoner was expecting?

Caller: Is this Mad Dog?

Caller: Please hold for the Governor.

Prisoner: (excitedly) Are you serious?

Prisoner: You have no idea how long I’ve been waiting for this.

Wife: Listen, Mad dog, my head is throbbing. Can we do this another time?

Prisoner: What do you mean?

Wife: I’m just tired, and the kids have been a bear lately, and this just isn’t a good time for me.

Prisoner: I won’t get another chance for ten years!

Wife: I’ll come back then, I promise. Can we just cuddle?

3. Tired prison jokes
What if prisoners had to deal with the same sort of daily jokes (Working hard or hardly working?) as office workers?

Prisoner #1: Hey there Mad dog, got a few minutes?

Prisoner #1: Sorry. Hey man, that’s an awesome outfit. Where did you get it?

Prisoner #1: Sorry to bug ya, dude, but can you get me a rum and coke?

Mad Dog: Where would I get that?

Prisoner #1: Oh sorry. I just saw you tending bars, and I thought…

Mad Dog: Get out.

4. Prison Gang Fraternity Rush
What if they held a traditional fraternity rush to join prison gangs?

White Aryan: Have you ever thought about joining the Aryans?

Prisoner: I’m just kind of meeting all the guys right now, trying to get a feel for the different gangs.

White Aryan: Look, I don’t want to do the hard sell on you, because we only want guys who think for themselves, but I won’t lie--we probably have the best tattoo guy in here.

White Aryan: We also have the best volleyball team. And our guys can make knives out of dirt.

White Aryan: You better believe it. We're the best gang in the block.

Prisoner: Is there a membership fee?

White Aryan: One lousy pack of smokes. The crips are charging two packs and they suck at volleyball.

Reporter #1: Mad dog, can you tell us about your mindset?

Reporter #2: Mad dog? How do you think it’s going to go in there?

Mad Dog: I’m just going to take it one injection at a time. Yes, you in the back.

Reporter #3: Do you feel any remorse?

Mad Dog: Listen, you can’t dwell on past performance. Just put it behind you, and work on tomorrow.

Reporter #3: But there is no tomorrow.


Yes, we realize that thinking about jail is weird...but it could always be worse.

Consider these seventeen different convictions, indictments, and/or guilty pleas chronicled here: Political Docket. We may be thinking about prison, but these guys (16 Republican lawmakers, appointees, or lobbyists and 1 Democrat) will be going there. This site doesn't even chronicle our fine local Illinois politicians...which will make the national bunch look like amateurs by the time Pat Fitzgerald gets through with them.

Think of us and listen for the sports cliches when they hold their jailhouse press conferences.

And remember to bring your clothes-pin to the polling booth this year. The smell is worse than usual.

If you missed any previous Half Empty columns, click here: http://halfemptyarchive.blogspot.com
Posted by Rick Kaempfer at 12:03 AM

Suburban Man: Why do I write?

Note: This past weekend I MCed the 50th Anniversary banquet for the Green White soccer club. My Dad was one of the founders of that club, and I've been thinking about him quite a bit lately. I also attended my 25th High School Reunion, and the number one question people asked me was "Why did you become a writer?" This piece I wrote in April has been on my mind all weekend. I hope you'll indulge my re-running it today. 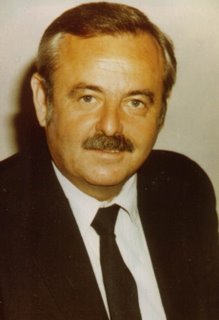 
Losing a parent has a tendency to change your outlook on life. I know it happened to me. When my father died seventeen years ago, I was 25. That’s a pretty young age to become fatalistic, but I’ve chosen to look on the bright side of being fatalistic. For one thing, I no longer take things for granted because I know that my time on this earth is limited.

I know this is going to sound bad, but I wish my father had been a little more fatalistic. Of course, it’s totally unfair to say that about a man who walked into a hospital emergency room one day at the age of 54, and never came out again. His mindset was understandable. Both of his parents were still alive when he died. He had no reason to ever think about death. And even if he had, all three of his children were already adults (25, 24, and 19), and he had done a pretty good job of raising relatively normal functional members of society. Why would he bother thinking about what life would be like without him?

I know I’m being greedy here. I realize that. He gave me all he could give...and then some. But now that I’m a father myself, I find myself wanting something I never wanted before. His advice. I always considered Dad to be a source of wisdom, even when I strongly fought against it. He was a reasonable man, a thinker, someone who gave quite a bit of thought to his words before they came out. He wasn’t always right, but he was never rash or emotional. In short, he was the perfect kind of person to ask for advice.

And I never did.

And now that I’m a father myself, I have a million questions.

That’s probably one of the reasons I have so overcompensated with my own boys. I’ve tried to use my father as a model—his steady temperament and his guiding hand, while trying to give them what he couldn’t give me. It’s one of the reasons I’ve decided to stay home and raise them. I’m part of virtually every phase of their lives, and I’m constantly giving them unsolicited advice about every subject under the sun just in case they ever need it someday.

Unfortunately, I don’t quite have the fountain of wisdom my father had. He had knowledge that came from a difficult childhood of emigration and language barriers and hardship that I couldn’t even imagine. You learn things when you experience difficulty—and he must have learned so much. Most of those lessons learned, however, died with him. I didn’t have the foresight to ask about them, and he didn’t have the foresight to commit them to paper.

That way, what I know will not go away when I go away. Even if my boys choose to ignore it for most of their lives, I’m fairly confident there will come a time when curiosity will get the best of them, and they will seek out wisdom from their father. When that time comes, there’s a possibility I won’t be around to deliver it in person.

The son spends his life trying to distance himself from his father, trying to make his own way in the world, trying to become a man. There’s nothing wrong with that—it’s part of growing up. I certainly don’t take it personally when my boys ignore my advice and insist on making the same mistakes I made. Some kids just learn better that way. I know I did. But there will come a day when they need me. And I just can’t bear to think that I won’t be there when they do.

When they do seek me out, even if I’m not around, my words will still be here, to bring me back to life. They won’t have to wonder what was going through my mind when I was in their shoes--because they can read it. And if they end up having boys just like themselves—and my experience tells me they just might—they can see how and why I did what I did.

Why do I write? I know that part of the audience for every word I write includes three grown men I’ve never met. Three men who may one day want to ask Dad for advice. I only have my time, my love, and my words. I give those with all of my heart.

The History of Green-White Soccer Club

(Last night I was the MC for the 50th anniversary banquet for Green-White soccer club--a club that my father co-founded in 1956. They asked me to write a history of the club for the program book, and I'm reprinting it here for anyone who wasn't able to make the banquet)


The eighteen young men who gathered to play for the first Green White soccer team in August of 1956 never would have believed that their club would still be playing soccer today, a half century later. The founding members were all of German ancestry, and all knew each other socially as part of the Society of the Danube Swabians, but it was their common love of competitive soccer that led to the founding of the club.

Since that first game fifty years ago, some of the original players have seen their children and grandchildren play under the Green White banner. Each generation has played under slightly different circumstances as the club evolved and changed with the times. Green White left the Danube Swabians in 1982 and became an independent organization. It moved from Chicago to Mt. Prospect, and it has grown into much more than the founding members ever envisioned. From that one men’s team of German Americans, Green White has become a club for everyone of all nationalities and creeds; fielding youth teams, women’s teams, and old timers’ teams as well.

One thing, however, has not changed in the past fifty years: Green White’s devotion to soccer. Like those first eighteen men who played together in 1956, today’s Green White members are bound together by a common love of the sport. We have been blessed with some extraordinary players and members over the years, and many of them are recognized elsewhere in this program book. If you took away any one player’s or member’s contribution at any time over the past fifty years, Green White would not have been Green White.

Green White’s history is here tonight; in the flesh, in the hearts, and in the memories of every person attending this banquet.

Without every single one of you, none of this would have been possible.
Posted by Rick Kaempfer at 12:03 AM