This week I interviewed the program director at WILV (100.3 FM) Barry James. We talk about his radio station, his former radio job at the Mix, and a scathing letter he sent to me years ago when I was a columnist at Chicago Advertising & Media.

You can read it here.
Posted by Rick Kaempfer at 11:30 AM

Courtesy of the Chicago Tribune...

Chi, glad job over?
Posted by Rick Kaempfer at 9:19 AM

Posted by Rick Kaempfer at 7:04 AM

I love Paul McCartney. I love Stephen Colbert. But yet...somehow...this didn't work for me. I was surprised.

My kids have been home sick all week with fevers and hacking coughs. Good times.

Nevertheless, despite their hacking coughs, they have been sleeping well at night. Bridget discovered a wacky remedy last year which I wrote about in a Father Knows Nothing column.

It really does help them sleep, even if doesn't cure anything.
Posted by Rick Kaempfer at 12:52 PM

In no particular order...

1. I have played Stratego against my sons 50 times in the last week (they've been home from school, sick).
2. I've never fired a gun--not because I have a philosophical problem with it--but because I'm sure I would somehow shoot myself.
3. The battery in my car died last week, which was easy enough to resolve. But when the battery dies, the radio can only be restarted with a code, which I can't find. (I've discovered I really enjoy driving in silence.)
4. I gave up beer for Lent last year. I'll never do it again.
5. I bought my wife a sweater for Christmas. It had been so long since I went shopping for women's clothing that when the saleslady asked me who I was buying it for, I answered: "My girlfriend...um...I mean, my wife." (I've been married more than 17 years.)
6. I made up a word ("stoink") just to irritate my boys. I use it to answer any question I don't want to answer, and will never define it.
7. I always knew I would love working from home, but I could very easily become a hermit.
8. My wife and I didn't have a boy's name picked out for any of our kids until after they were born because we were sure it was going to be a girl all three times. (The girl's name was Grace.)
9. Bridget only got mad at me for sharing too much personal information on the radio or in my writing one time--when I talked about my vasectomy. (Whoops--just did it again.)
10. I didn't know what to call my in-laws the first four years I was married. I just waited until we had kids so I could go straight to "Grandmom and Granddad."
11. When I first started in radio, a program director tried to get me to change my name because "Kaempfer" is too ethnic. He suggested using my middle name as my last name. (My name would have been "Rick James.")
12. Some of my best radio stories will never be publicly told.
13. My father's name was Eckhard. He remains the only Eckhard I've ever met. (And I grew up in Germany)
14. I'm a right-brained creative, but I was raised by Germans. That makes me a punctual space case.
15. My mechanic suspects I don't know much about cars, but if he knew how stupid I really was, he wouldn't need any other customers.
16. I tell one joke. It's not clean. Most people don't laugh at it. But those that do, quickly recognize it's the funniest joke ever told. (I didn't make it up)
17. My little brother, my own flesh and blood, is a White Sox fan.
18. I'm the oldest child in my family, but my sister was always put in charge when my parents left us alone. It was a wise decision.
19. I believe the first act of "The Producers" is perfect.
20. I saw "Field of Dreams" the day before my dad died (in 1989) and was going to tell him what a great movie it was, but never got the chance. The "Wanna have a catch" scene at the end crushes me now every time I see it.
21. When I tell Bridget she's a great wife, she tells me I'm a great Chevy dealer. (She stole that dialogue from an '80s local TV commercial...but it cracks me up every time.)
22. I love the Beatles, but I'm fortunate my wife had the good sense to veto "Ringo" as my oldest son's name.
23. I Tivo four shows...The Daily Show, 30 Rock, The Office, and Top Chef.
24. I've met hundreds of celebrities and consider myself pretty jaded, but I've never been more excited than I was the day I met former Cubs outfielder Jose Cardenal in the produce section of my local Jewel.
25. I'm working on three book projects and two screenplays right now, but I just spent 15 minutes doing this instead.
Posted by Rick Kaempfer at 10:07 AM

As Cubs fans, when we think about great trades, we often think about the Sammy Sosa for George Bell trade. That was a good one for us. 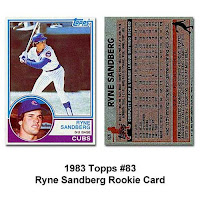 I can almost hear Dallas Green in the trade talks. "Oh, and how about throwing in that minor league infielder you guys don't need over there. What's his name? Ryne Sandberg? Yes, that's the guy. We'll take him off your hands for you. He'll just slow down the growth of Juan Samuel if you keep him."

Here's that extra infielder singing "Take Me Out to the Ballgame" at Wrigley the day his number was retired.
Posted by Rick Kaempfer at 7:58 AM 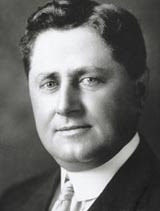 I've mentioned that Tom Ricketts, the new owner of the Cubs, reminds me a lot of William Wrigley Jr (photo), who was the owner of the Cubs in the 1920s and early 30s. Both are passionate Cubs fans in addition to being Cubs owners.

William Wrigley died on this date in 1932. He and his club President (Bill Veeck Sr. who would die the following year) put the pieces in place for the Cubs to have their second best decade of all-time in the 1930s. That wasn't his only lasting legacy. He was also the king of Catalina Island. Check out this video to see more.
Posted by Rick Kaempfer at 2:26 PM

The more I read about this guy, the more excited I'm getting. In today's Tribune he is identified as "a typical suburban dad."

More importantly, he's a big fan of the Cubs. The Cubs haven't had an actual fan running their team since William Wrigley in the 1920s.
Posted by Rick Kaempfer at 10:17 AM

The latest issue of NWI Parent magazine is out ("Fitness & Fun"), and once again I contributed the "Family Room" essay on the back page. This one is called "The Old Run-Around". It's about some excellent advice my mother-in-law gave me a few years ago regarding the best way to handle stir crazy kids during the winter.

I also just posted my latest "Father Knows Nothing" column at the NWI Parent blog. This one is about a rather delicate subject. I tried to discuss it as tastefully as possible.
Posted by Rick Kaempfer at 9:32 AM

I worked with Cindy at the Loop many years ago, and I interviewed her for Chicago Radio Spotlight last year. (You can read that interview here)

Happy birthday, Cindela. Remember...you'll always be older than me.
Posted by Rick Kaempfer at 9:22 AM