Richard M. Daley has been the mayor of Chicago since 1989. If he completes the term he was just elected to serve (with 71% of the vote), he will set the record for longest serving mayor in Chicago—surpassing his own father’s record.


Today is St. Patrick’s Day, and nobody is a bigger symbol of the Irish Catholic holiday in Chicago than Chicago’s very own Irish Catholic Mayor Richard M. Daley.

I’ve met the Mayor several times over the years during my radio career. The first time I spoke to him was actually before he even became the Mayor.

It was 1989. At the time I was the producer of the Steve Dahl & Garry Meier show on WLUP AM 1000. Steve & Garry were celebrating their ten year anniversary together that year.

Unlike most radio personalities, Steve & Garry actually thrived on surprise. It brought out the best in them because they were both gifted improvisers. Periodically during this year-long anniversary celebration, I would get people from their past or well-known celebrities to make surprise phone calls during the show.

During the election campaign of 1989 when Richie Daley was running for Mayor, two of his biggest fans were Steve & Garry. They often played audio clips of Daley’s common sense wisdom, his tortured syntax, and his big hearty laugh.

When I called the future Mayor’s campaign headquarters, I didn’t think there was a chance he would come on the show. After all, Steve & Garry had a reputation. They were naughty. They had been fined by the FCC. They were considered “shock jocks.” Politicians usually avoided the show like a plague because they feared being associated with them.

Plus, Daley didn’t strike me particularly as a risk-taking politician. In fact, he was widely known as being exactly the opposite. I was lucky, though. Someone on his campaign staff was a regular listener of the show. He knew that Steve and Garry had been overwhelmingly positive, and he advised Daley to do it—to connect to the young voters.

The call itself lasted only a few minutes, but it turned out to be great move by the Mayor. He didn’t slip up, he laughed heartily at everything Steve and Garry said, and he got off the phone before they said anything too controversial. Steve & Garry were thrilled that he called. The next day it also got a positive write up in two of the biggest gossip columns in Chicago. The man who was widely mocked for being an overly-cautious intellectually-challenged political lightweight had passed the test with flying colors.

Four years later I was producing the John Landecker show on WJMK. By then it was almost impossible to get Mayor Daley to do a radio appearance. His schedule was booked ridiculously far in advance, and he avoided any appearance that had even a whiff of trouble. We were just getting the Landecker show off the ground at the time, and I knew an appearance by the Mayor would give us instant credibility, so I pushed hard for an in-studio visit.

It took almost six months, but he finally agreed. We had him for thirty minutes, which doesn’t sound like much—but ask any producer in Chicago how many of them have gotten the Mayor to come into the studio for a thirty minute conversation. It simply doesn’t happen.

That morning he was relaxed and amazingly comfortable. John had classic tapes of Daley’s father, and the two of them talked about what it was like growing up in that household, what it was like at the ’68 convention, and what kind of rules and regulations they had in the Daley house. Landecker & Daley formed an instantaneous generational bond. It really was an entertaining interview—and the mayor was candid, warm and friendly.

A few years later, on the day John was given a special tribute by the Museum of Broadcasting in Chicago, Mayor Daley declared it John Records Landecker Day in Chicago. I believe he did the same for Steve Dahl a few years later when Steve celebrated his 20th year in Chicago radio.

I’ve heard all the horror stories about how hard it is to work for Mayor Daley. Rumor has it that he possesses a hair trigger temper. Judging by the incredible staff turnover, it’s probably true. I’m also not blind to the corruption in City Hall. His administration, especially in recent years, has been ethically challenged to say the least. Judging by how closely he worked with the people who have been indicted and/or sent up the river, he must be involved too. At the very least, he turns a blind eye.

For those reasons, if I still lived in Chicago, I probably wouldn’t have voted for him this time around—although his opponents weren’t exactly Abe Lincoln and FDR.

On the other hand, I’ll always appreciate those two times he let his hair down a little and took a risk by appearing on the Steve & Garry and John Landecker shows.

That’s the Mayor Daley I salute on this St. Patrick’s Day in Irish Catholic Chicago.


Last year for St. Patrick's Day, I asked my friend Brendan Sullivan to write about what is was like growing up south side Irish in Chicago. He did a nice job.
Posted by Rick Kaempfer at 12:03 AM

Half Empty: The Hidden Meanings of Flowers


Remember when flowers were considered the perfect gift for women? You could get them for your wife, your mother, your female friends, or your female co-workers—and nobody thought a thing of it—other than “Awwww. That’s so thoughtful.”

Those days are over. If you haven’t bought flowers for a woman lately, you’ve missed a complete transformation of flower society. Flowers are still considered a perfect gift, but now they are too perfect.

Man: I like to buy some red roses please.

Florist: Oh your wife will love these.

Florist: Do you want her to be your girlfriend?

Florist: Excellent choice. Would you like a soft gentle pink or a deeper pink?

Man: Well…I’m getting her flowers because she got a promotion. It’s not exactly gratitude.

Florist: Are you her boss or is she your boss?

Man: Well, I guess admire her…

Florist: (grinning) In a slightly, where can this lead us, sort of way?

Florist: Then I’d recommend staying away from the soft gentle pink.

Man: What about white roses.

Man: No. What about those peach roses?

Florist: You mean the burgundy? Those mean “unconscious beauty.”

Man: No. The yellow?

Man: How about just one?

Man: Are you serious?

Man: No. What do you recommend?

Florist: I’d recommend an arrangement with the yellow roses as the centerpiece.

Florist: Her zodiac sign? If she’s an Aries, I’d recommend some tiger lilies or impatiens, if she’s a Taurus, I’d say go with a poppy or daisy, if she’s a Gemini—lily of the valley or lilac, if she’s a Capricorn—

Florist: What kind of plant? Would you like a…

By the way, just for the record, we didn’t make up any of those “meanings.” Feel free to save yourself some heartache and study the conversation before you enter the florist next time.

Another free service of your good friends at Half Empty.

By the way, tomorrow is the Ides of March. Seems like a good time to get an endorsement for our advertising agency from the leader of the band--Ides of March: Jim Peterik for A.M.I.S.H. Chicago Advertising
Posted by Rick Kaempfer at 12:04 AM 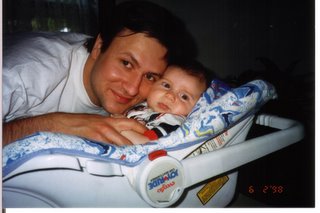 The headline on the Daily Herald front page: “Clinton refuses to say whether he will testify to grand jury”

The headline on the New York Times front page: “The World of Paula Jones”

But the biggest story was happening in Mt. Prospect, and only one reporter was on hand to break the story....Me. I called into the John Landecker show that morning to report the news flash. The cast of characters included John Landecker, sidekick Catherine Johns, and newsman Richard Cantu.

The following is a transcript of that important phone call.


John: Oldies 104.3, John Records Landecker, it’s 8:27, and joining us on the phone from the maternity ward is the producer of the program, Rick the German Boy Kaempfer. Good morning, Rick.

Rick: Well as long as we’re plugging our kids (John had just plugged his daughter’s play), I’ve got a new one to plug.

Rick: Last night around eleven thirty Bridget’s water broke and we didn’t even have time to make it to the hospital downtown, so we went to the one out here.

Catherine: Oh, is that right?

Rick: And we have a new baby boy!

(Cheering and clapping in the studio)

John: Wait a doggone minute! You went home to check on your other child before you called the show? Where are your priorities?

Rick: Sorry, forgive me. I’m hopelessly out of whack.

Catherine: We know what you’re saying.

John: No, how long was the baby?

Richard: Once more into the gutter.

John: So what time was this kid born?

Rick: Two o’clock in the morning. They kicked me out of the hospital at 4:00, because Bridget has to share a room, and I came home and got a little sleep, and Tommy just woke me up, so I’m calling you right away.

John: So you’ve called all your family I hope.

John: But she had the baby.

Rick: Yeah, she had the baby in about two hours. It wasn’t that bad, although that’s easy for me to say. She was fine, what a trooper.

Catherine: And she wanted to chat, right?

Catherine: Now I want to know something. Does this child have a name?

Rick: Oh yes he does. His name is John Richard Kaempfer.

Richard: You honor us, Sir.

John: Was he named after anyone?

Rick: And actually John is also a name in Bridget’s family. Her grandfather was named John. And so is her brother.

John: I see you got baby waiting there.

Rick: Yeah, I think I may be popular today.

John: Well, we’ll let you go. Congratulations on the big news! So you’ll be back to work tomorrow, right?

John: There he goes. Proud papa.

John: Oh wait! Darnit! I forgot to ask him if he taped it.

Richard: Are you kidding? Of course he did.

John: Because if there was ever a disc jockey who knows how to exploit a child, it’s....

Of course, I did tape it, by the way. It aired the next day. Friday the 13th. 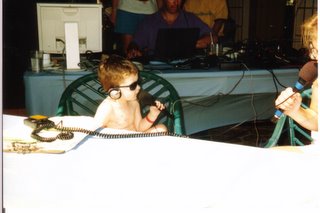 By the time Johnny was three he was doing movie reviews and jokes on the radio. He also accompanied the show to the Dominican Republic for a live broadcast. That's him in the photo there chatting with Leslie Keiling.


Johnny is also the star of this article I wrote for Lake Magazine three years ago.
Posted by Rick Kaempfer at 12:03 AM