Today's Tale from a Bad Century at JOBC is about the wacky hijinks of one of my favorite players when I was a boy: Jose Cardenal.

Read all about him here.
Posted by Rick Kaempfer at 9:14 AM

I just posted my weekly Suburban Dad contribution to Kim Strickland's City Mom blog at Chicago Now. This one is called "How do you know when beer is too much a part of your life?"

The Cubs have an All-Star! 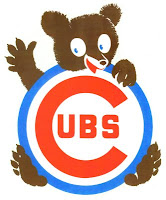 There's been a lot of speculation this year about which Cub would go to the All-Star game. Let's face it, we don't have a lot of players having all-star worthy seasons. Maybe one or two. Maybe.

But we do know one Cub that is definitely going to the all-star game.

Mike Quade.
Posted by Rick Kaempfer at 9:36 AM 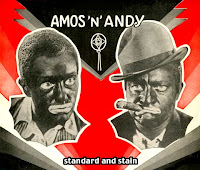 Sixty years ago today America got their first look at Amos & Andy when the long time radio hit debuted on television.

Amos & Andy was a Chicago institution. (I've previously written about the show for Just One Bad Century, if you're interested)

Check out this video. It's the original (white) radio Amos & Andy introducing the new (black) television cast. It might make you a little uncomfortable. Let's just say it certainly isn't 1951 anymore.

Here's the question, and I'll warn you it's a little obscure today: On this day in 1992, the Cubs acquired a gimpy-kneed slugger (a leftfielder) from the Los Angeles Dodgers. He only hit 4 homers for the Cubs the rest of that year and was released when the season was over. Name him.

UPDATE: We have a winner! Lydia Rypcinski knew that Kal Daniels was the slugger the Cubs acquired on this day in 1992. He was only 28 years old, and he had already hit 100 big league homers when the Cubs got him, but Kal was pretty much finished. After his stint with the Cubs he never played in the big leagues again.
Posted by Rick Kaempfer at 12:58 PM 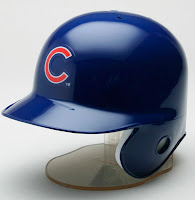 He's finally coming back to the Cubs after that terrifying pitch to the face in Boston, but he'll be wearing a specially designed helmet instead of the usual Cubs helmet shown here.

ESPN has the details.
Posted by Rick Kaempfer at 10:54 AM

I just posted my latest Father Knows Nothing column at NWI Parent. This one is about the tornado that hit our town this week.

You can read it here.
Posted by Rick Kaempfer at 1:12 PM