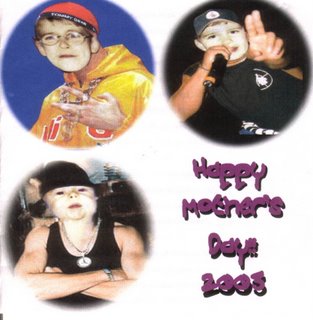 When I was still working on the radio, my boys provided a constant stream of material. Every year on Mother's Day, we would go into the studio and produce an audio present for Bridget.

This one was probably my favorite Mother's Day present for Bridget. One long-time fan/listener of the show said it was her favorite bit we did in the ten years of the John Landecker Show on WJMK. It's a rap song starring all three boys. Tommy was seven. Johnny was five. Sean was nine months old. All three can be heard on this hilarious recording. Thank you to Vince Argento for his production magic (and artwork).

A few words of explanation: The words Johnny says in the song ("Allerticott" and "Baga") are Johnny's made up words--inside family jokes. He said them in fits of anger (allerticott) and for comedy purposes (baga).


Click on this link to listen to the song: Mother's Day Rap

It's short, less than a minute long.

This year with no studio, no production director, and no rap music library, we'll probably get her some flowers.

If you missed any previous Suburban Man columns, click here: http://suburbanmanarchive.blogspot.com
Posted by Rick Kaempfer at 12:03 AM