Will the Cubs be throwing at Theriot? 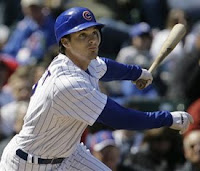 Ryan Theriot's sin, in case you missed it, was saying that he's "finally on the right side of the rivalry" now that he's with the Cardinals. Cubs backup catcher Koyie Hill sure made it sound like the Cubs are upset and may throw at Theriot when they face him this year.

The story is here.

I personally think Hill was overreacting and/or playing to the Cubs convention crowd. They won't throw at Theriot. They shouldn't either. What was he supposed to say when he came to St. Louis? I wish I was still a Cub? C'mon.

Don't get me wrong--I didn't like hearing it either--but I don't really think Theriot has any animosity toward Chicago. He was just trying to get Cardinals fans to accept him.
Posted by Rick Kaempfer at 1:05 AM