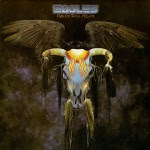 Ever live with someone who played the same band over and over and over again? Well, a South Carolina woman lived with such a man--and he was playing the Eagles continuously. She told him to stop it, but he refused. So...she went into the kitchen, got a knife and started stabbing him. (He is OK)

CNN.com has the article. My favorite part of the story is this line, which of course, I was expecting to read at some point:

Police added that "all parties involved were intoxicated."

The article doesn't say what happened the next day, but I'm guessing after the Tequila Sunrise, the Witchy Woman apologized to the Desperado, who in turn, promised to Take It Easy with the Eagles music. But mark my words, One of These Nights he'll Take It To The Limit again. If she's smart, she'll be Already Gone.
Posted by Rick Kaempfer at 6:57 AM