The Birth of Tommy Kaempfer

My oldest son was born 18 years ago today... 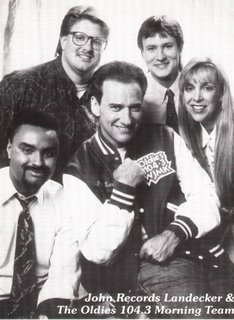 The following is a transcript of the telephone conversation on the air the morning of Tommy's birth. The participants are John Landecker (center), sidekick Vicki Truax (the only female in the group picture), and proud papa Rick.

(Loud cheering and whooping in the studio)

Rick: Everyone is fine.

Vicki: Bridget is fine too? Is she exhausted?

Rick: And I recorded the entire thing on Digital audio tape.

Vicki: You're kidding? She didn't make you turn it off?

Rick: No. I had it put in a nice place where it didn't get in anyone's way.

Rick: Yup. And we got his first bath on tape too, and his first cry.

John, Vicki & Rick: Hug and kiss them all the time?

Rick: He is so damn cute.

Rick: Wait a second...is he crying? Hold on.

Sound: A tiny baby cry can be heard.

John: Is that him?

Rick: He's got some lungs on him.

John: Does he want to come in and do a few record talkovers?

Vicki: How long is he?

Rick: It was so cool. It was just like the movie "Alien." The baby kind of popped out and looked around. Then he jumped up and sucked my eyes out...

John: Then Siguorney Weaver came in with some sort of a mechanical device. It was unbelievable.

Vicki: You guys. Is he all wrinkly. Does he have hair?

Rick: Yeah, he does have hair. That was the first thing we saw. I asked the nurse...ewww...what is that? That's his hair. Oh.

John: Did you get it on tape?

Rick: Of course. Uh, oh. I have to go. We need to take Bridget up to the recovery room.

Vicki: You're still in the delivery room?

John: How many calls have you made so far?

Rick: This is my second call. I called my mom first.

Vicki: I kind of liked the other name Rick was talking about before.

John: I don't think Bridget was ever going to agree to Ringo. 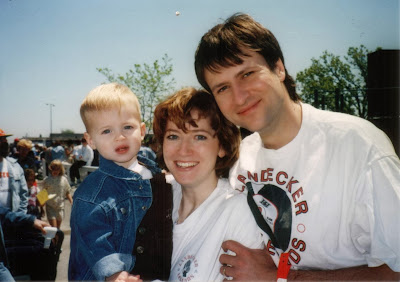 Posted by Rick Kaempfer at 7:41 AM