Every weekday in 2014, I'll be keeping an eye on what's happening in the media. My focus will be on some of my favorite subjects...the moguls, the pundits, the broadcast news biz, show business, and the publishing business. (Read "$everance" if you want a crystallization of my positions on those subjects.) And, of course, I'll also keep tabs on Chicago's media.

~Mary Dixon in the Ilinois Entertainer
My latest media column was posted in the Illinois Entertainer over the weekend. I interviewed WXRT's Mary Dixon, and one of the things we discussed was the family atmosphere that surrounds WXRT--a rather unusual atmosphere in the modern radio world...


"Someone remarked to me when Terri was inducted in the Radio Hall of Fame (2010) that it was notable how all the XRTers seemed happy for her. It struck me as kind of funny. We all know that Terri’s earned her honors, and that recognition for one member of the team reflects well on the rest of us. From Norm on down, we all feel ownership in what we’ve built together. That applies to the listeners, too, by the way. They celebrate our victories and scold us when they think we’re wrong. We see them at concerts and around town. The fact that they care so much is just amazing. And it brings us back around to how we always try to do our best, every day, to deserve it.”

The entire piece is available at the link. My April column (which I'm finishing up this week) will feature Bob Sirott and Marianne Murciano.

~Tributosaurus Does Zeppelin
Went to the show on Friday night with my 18-year-old son, and we really enjoyed it. There's something about watching four different guys tackling the vocals of Robert Plant that makes you appreciate the incredible vocal range he possesses. Here's a photo from the cheap seats, with WSCR's Matt Spiegel tackling "Fool in the Rain"... 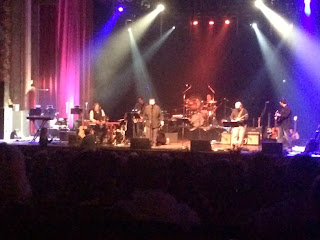 ~Jimmy Fallon really did come to Chicago and do the polar plunge
It will be on the Tonight Show tonight, but here's the pre-show evidence...

~Ellen's Oscar Selfie is Most Re-Tweeted Tweet of All Time
I was online last night and was surprised at some of the negative reaction Ellen was getting as the host of the show. I thought she was very good.

~The Oscars in Two Minutes
If the top ten moments is too time consuming for you, People Magazine has it cut down even more here.

~As the Rupert Turns
When you're in your 80s and you run a giant conglomerate, it's only natural for people to wonder who will succeed you. In most companies that would be discussed openly and would be obvious to shareholders. Not at Rupert's News Corp. It changes from week to week. For years it was assumed it would be his daughter, and then she married that liberal guy who rips her daddy. Then it was youngest son James, until he did a terrible job testifying before Parliament. Now it appears to be the formerly outcast son Lachlan...

Rupert Murdoch's eldest son is on the verge of claiming the News Corp. throne, according to Michael Wolff, writing in Town & Country's March issue [unavailable online]. "Among the Murdochs, Lachlan's return is regarded as a virtual done deal. News Corp. is spoken of as Lachlan's company."

~Attention Shock Jocks and Serial Swearers
From Inside Radio today, news that may set you free:

Weather shuts FCC on Monday. The latest bout of snow and ice in Washington, DC has shut down the federal government today, including the FCC.

This has been a public service announcement.

Posted by Rick Kaempfer at 7:58 AM