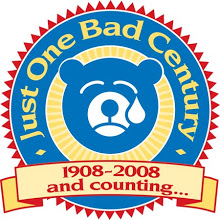 Another draft is in the books, and the Cubs picked someone I didn't see anyone predicting they would take on their mock draft boards. Meet their first pick (4th overall): Indiana University catcher/outfielder Kyle Schwarber. The Cubs say they had him ranked #2 on their board, and #1 as a hitter. Although, it sounds like they don't think he's going to be a big league catcher. More likely a left-fielder.

But what about pitching? Don't the Cubs need pitching? Yes they do. So, meet their second pick (45th overall): University of Maryland's Jake Stinnett.

I'm still willing to give Epstein/Hoyer/McLeod the benefit of the doubt. I watched a lot of reactions last night via twitter and on television, and I haven't seen too many experts claiming these picks were horrendously bad (like they correctly predicted some previous pre-Theo Cubs drafts had been). How bad were some previous drafts? Check out this analysis.

Today in Wrigley History we go back to 1923 and one of the foggiest days in the ballpark's history.

You'll be seeing this in the news all day today--it's the 70th anniversary of D-Day. It's why we chose it as today's Historical Event. Where were the Cubs?

And finally, Today's Cubs Birthdays are a smorgasbord of Cubs fun: A man called Little Eva, a player who ran to the wrong base after hitting the ball, a Cubs draft pick who was a bust as a pitcher but made it back to the big leagues as a hitter, Lefty, and a cup of coffee from the 1950s.
Posted by Rick Kaempfer at 7:41 AM