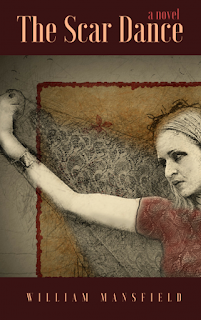 The Scar Dance is now available for pre-order on Eckhartz Press. What is it about? The old saying, “no good deed goes unpunished” was never more true than on a summer day in 2013. While doing a favor for her neighbors, Kelly was savagely mauled by their two huge bull mastiffs and a labrador. "The Scar Dance" is about the incredible journey she and her husband went on during her recovery.

We recently had a chance to sit down with the book's author William Mansfield to find out more...

EP: Before writing this book you were primarily a visual artist. Non-artists think these are related fields, and in a small way they are, but there are also significant differences. Talk about how your visual work prepared you to write this, and how it didn't prepare you at all.

William: My visual art did not really prepare me to write "The Scar Dance", because it is much different from my writing. For years I focused on gritty urban/industrial landscapes as my main subject matter, which were not very personal, but rather were objective observations of my environment. My transition to becoming a writer began when my parents passed away. I did a memorial series of drawings for them titled "A Eulogy in Pictures." This was a series of five drawings of their house and yard, which was a beautiful property in Bloomington, Indiana. The drawings were accompanied by text which told stories about my parents and described the meaning of each scene I depicted. This was my first attempt at writing. This series was an important transition between being an artist and becoming a writer. The website link is eulogyinpictures.weebly.com. "The Scar Dance" is much more personal than any of my visual art, opening a window into my relationship with Kelly as we attempt to process a traumatic experience and move on with our lives.

EP: Authors are taught to learn the elevator pitch. That is, how would you describe this story line to someone if you met them in an elevator, and only had a few moments to explain it?

William: The old saying "no good deed goes unpunished" was never more true than on a summer day in 2013. While doing a favor for her neighbors, Kelly was savagely mauled by their two huge bull mastiffs and a labrador. Luckily their fangs missed her major arteries but left her severely injured and scarred. Kelly's subsequent long road to recovery is littered with court battles, emergency calls, harassment and profound self-doubt. "The Scar Dance" is a story where love proves to be stronger than hate, where courage is stronger than fear, where truth is stronger than lies, and ultimately where good is stronger than evil.

EP: This book was obviously inspired by a true story, but you made the conscious decision to turn it into a novel. Did that make it easier or more difficult and why?

William: I did not make a conscious decision to turn my memoir into a novel. Rather it simply evolved that way as I wrote it. This made it easier for me because it allowed me to view the story as an abstraction, separated from the hard realities of the real life situation, many of which were still in play as I was writing the book. I wrote in the novel that at times I did not feel like I was actually living the story, but rather that a book or movie character who looked like me was playing my role. In particular I found it fascinating to watch Kelly develop as a character. As the book evolved she became her own separate entity. Of course Kelly's book character is based on her real life character, but she became her own presence distinct from the flesh and blood Kelly who I am married to. The same is true of other characters in the story as well.

EP: You and your wife are long-time Chicago residents. "The Scar Dance" takes place in Chicago. What neighborhoods and locations might the readers recognize?

William: When I first began writing "The Scar Dance" I thought that the setting did not matter. After all you could have vicous dogs and horrible dog owners anywhere. There is nothing specific to Chicago about that. Yet the more the story developed the more Chicago as a setting became part of the story, in particular the Humboldt Park neighborhood. We lived in Humboldt Park for 14 years, and we lived there when the dog attack happened. The heart of the action takes place in Humboldt Park, and the neighborhood became a character in its own right, which is something I never intended when I began writing the book. Some readers may also recognize the courthouse downtown near the River North art gallery district, which is where our legal case takes place. Another important setting is a condo owned by friends, where we lived for a month while we were closing the sale on our new house. It features a fourth floor rooftop deck with a beautiful view all the way to downtown. Our new neighborhood is not named because we do not want the dog owners to know where we live, although it may seem familiar to some readers based on my descriptions.

EP: Dog lovers might be scared off by the subject matter--but you are clearly, despite the trauma involved here--you are still clearly a dog lover yourself. What have you learned about dogs and what makes them dangerous in city settings like this?

William: Kelly and I are both dog lovers, and that did not change after the attack. We own three dogs, small terrier mixes, and Kelly likes nothing better than to cuddle up on the couch with them while watching TV or a movie. We also love to take them hiking and camping with us. While dogs can be dangerous in a rural or suburban setting, they are particularly dangerous in an urban setting because of the higher number of targets. Also there is more stimulation in an urban setting which could make a dog agitated or aggressive. We discovered a website called DogsBite.org which advocates for dog attack victims nationwide. Through this organization we learned that there is a major nationwide problem of dangerous dogs owned by irresponsible and/or dangerous people. Initially we thought that the attack on Kelly was an isolated, horrible, freakish incident, but through DogsBite.org we learned that this was not the case. Many people across the country have been killed or seriously injured by dangerous dogs, and quite often the blame lies with irresponsible dog owners. We have always understood that the dogs are not to blame for the attack. They were victims of human abuse, neglect, and mismanagement from the time they were puppies. They were vicious monsters, but they were monsters that human beings created.

EP: When you speak to authors as often as I do you hear a few common themes. Among them--the ways in which this final product turned out much different than they initially envisioned. How is that true of your work?

William: "The Scar Dance" turned out to be a vastly different product than I initially envisioned. At first it was not a book at all, but rather a series of journal entries with no organization whatsoever, just writing about what was on my mind on that particular day. Gradually I began to organize these into a coherent manuscript. When I first began writing we were in the midst of our legal case with the dog owners, and our attorney advised me not to write anything on electronic media because it could be admissible in court. The first drafts were written on good old fashioned pen and paper. I find it appropriate to the story that to being writing it I had to go off the grid. Writing this book proved to be a fascinating process because it is so subconscious. There are several themes which developed that I never consciously planned on, but which grew spontaneously through the process of writing. I took a great writing class called "Memoir in a Year," and the teacher and fellow students were the first people to read this book. One thing I found striking about their responses is that they all wanted to learn more about Kelly. They were not interested in some anonymous woman who got bit by dogs. They really wanted to know who Kelly was. I began to focus on developing Kelly as a character, both as an individual and in her relationship with me, and I came to the realization that in a strange and twisted way I was writing a love story. It is about a couple working together to overcome a terrible trauma and survive in a dangerous situation. I never thought of this as a love story when I began writing. As the story developed it took on a life of its own. I came to feel that I was not writing the book, but rather that the book was writing me.

EP: Who do you think is the perfect audience for this book?

William: I think the perfect audience for this book is trauma victims. Of course dog attack victims will be interested, but it does not necessarily have to do with dogs. Many people who have had a traumatic experience or suffered from PTSD will be able to identify with Kelly. They will be inspired by Kelly's courage and can understand her struggles in processing this terrible experience and rebuilding her life. People who have experienced legal injustice may also be able to identify with this story. "The Scar Dance" is a book about a traumatic experience written not by the victim, but rather the supportive partner of the victim. Many people will also be able to identify with me as the supportive partner, and will appreciate the unique challenges that come with that role.
Posted by Rick Kaempfer at 11:33 AM