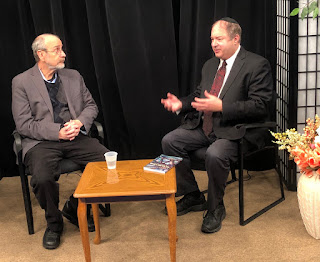 When I first met Eckhartz Press author Richard Reeder ("1001 Train Rides in Chicago"), he immediately reminded me of my old friend Rabbi Doug. Doug is the host of a local television show, so I connected the two of them yesterday for an interview. They hit it off as much as I predicted they would. In a weird twist of fate, Doug's office is now in the same building Richard's grandmother once lived...and Richard has a painting of that building up in his living room.

The interview will air in four or five weeks.

Posted by Rick Kaempfer at 8:28 AM