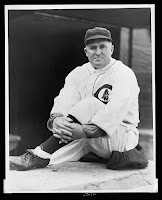 The five year reign of Joe Maddon as manager of the Cubs reminds me a lot of a similar five-year reign by a Cubs manager in the late 20s. His name was Joe McCarthy. That Joe never had a losing season, took the Cubs to the World Series (1929) and was let go after the Cubs collapsed in the closing days of the 1930 season. He did OK after he left the Cubs. He went on to manage the Yankees, and won seven World Series. Two of them were sweeps of the Cubs. (And yes, of course, his story is in everycubever)
Posted by Rick Kaempfer at 9:13 AM