Last week (9/6) we lost former Cubs pitcher Tom Phoebus at 77 years old. He pitched in the World Series for the Orioles, but his last year in the big leagues (1972) was with the Cubs.

This is his obit in the Baltimore Sun.

Here's his writeup in Everycubever... 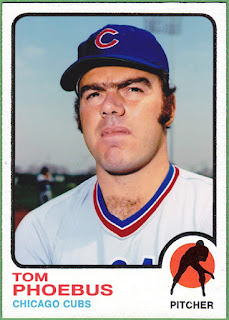 ~Tom Phoebus 1942--2019 (Cubs 1972)
Phoebus was a member of the very impressive Baltimore Orioles starting rotation of the late 60s. He was a star right out of the gate. He threw shutouts in his first two big league starts and was named Sporting News Rookie of the Year in 1967. He won 15 and 14 games the next two years as well, tossed a no-hitter against the Red Sox, and won a game in the 1970 World Series. By the time he came to the Cubs in 1972, however, he was primarily a relief pitcher. He struggled with his control in Chicago, and the Cubs traded him to the Braves after the season for a career minor leaguer named Tony LaRussa. Not sure what happened to that LaRussa kid.

Posted by Rick Kaempfer at 5:18 PM