A Letter to David Stern 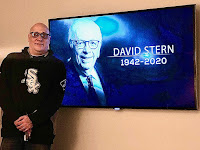 Needless to say, he never got a reply...

I’m worried about you. Here it is, July, basketball’s off season—and you still show up to work every day.

What if I told you that I could make that happen?

You see, my name is also David Stern. If you hired me to sit in your office for the summer, you could have the entire summer off, and nobody would be deprived of spending some quality time with David Stern.

If someone called to speak to David Stern, they could still do so…without inconveniencing you.

If someone stopped by to have a meeting with David Stern, they could still do so…without inconveniencing you.

If someone booked David Stern to deliver a speech at the National Press Club…David Stern could still do so, without interrupting your trip to Cape Cod.

Think about the possibilities. How much would your wife love it if David Stern actually picked out her gift? How honored would NBA players be if David Stern showed up at their weddings? I don’t like to brag, but have you considered how nice it would be to have everyone talking about what an incredible dancer David Stern was at Dwayne Wade’s wedding?

While I don’t look like you, I am also a relatively short Jewish guy. Nobody would be the wiser. Please give it some thought.

David Stern
Posted by Rick Kaempfer at 11:22 AM