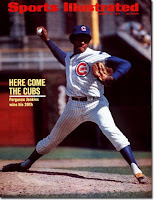 The outfielders didn't amount to much, but that little known reliever was converted into a starter by Leo Durocher and won more than 140 games for the Cubs over the next seven seasons.

He's in the Hall of Fame wearing a Cubs cap.
Posted by Rick Kaempfer at 7:07 AM