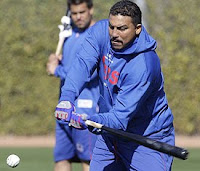 Carlos Zambrano said he's going to let his stats do the talking for him this year, but his mouth did contribute one thing before his stats told him to shut up.

He said he wants to start his seventh consecutive opening day.

Let me just say this to Carlos: "Even if you had been our best pitcher the last few years, which you clearly haven't, you still stink on Opening Day."

Do Carlos' stats want to say anything? Yes: "Your record the past six Opening Days is 1-5. Last year you gave up 8 earned runs in 1 1/3 innings."

I think I'm going to enjoy hearing from Carlos' stats this year.
Posted by Rick Kaempfer at 7:44 AM