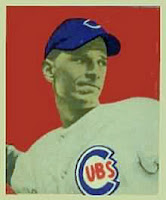 On this day in 1921, future Cub great Andy Pafko was born. Nicknamed "Handy Andy," because of his incredibly dependable hitting and fielding, Pafko was one of the most popular Cubs, and a star of their last World Series team of 1945.

"Handy Andy" was a five-time all-star during his Cubs career, the first three times as an outfielder. After legendary Cubs' third baseman Stan Hack retired after the 1947 season, Pafko replaced him on the hot corner long enough to be named an All-Star there too, making him one of the few people to achieve All-Star status in both the infield and outfield.

He was crushed when the Cubs traded him during the 1951 season, and it was a trade that Chicago would forever regret. The players they got in return had almost no impact with the Cubs, while Pafko would go on to play in the 1952 World Series with the Dodgers and the 1957 and 1958 World Series with the Braves.

He came back to his hometown of Chicago after his playing career was over, settling in the northwestern suburbs. As of 2012, he is last surviving member of the last Cubs World Series team.
Posted by Rick Kaempfer at 9:32 AM