At the end of last year, I made a couple of big decisions regarding my writing future. My company Eckhartz Press is going very well. So well, in fact, that something had to give in my ridiculously busy schedule. So, after ten years of working as a free-lance writer and contributing editor for Shore Magazine and it's related titles, I stepped down at the end of the year. I may do an occasional piece for them in the future, but I will no longer be a regular columnist. They have given me permission to release the best of those columns, repackaged in some way, into a book. I'll be working on that project all year, and it will be coming out for the Christmas season 2014 as "Father Knows Nothing". (Naturally on the Eckhartz Press label). I'm super excited about that one. I'll keep you informed about my progress periodically here, and I'll also write an occasional "Father Knows Nothing" column here as well.

My only free-lance writing gig for now is my media column at the Illinois Entertainer. I intend on continuing that, at least through this year. In fact, my latest column about Cara Carriveau was posted over my holiday break. You can read it here. I'm interviewing next month's subject tomorrow. Stay tuned.

I'm also in the process of revamping and relaunching my other writing projects, including this blog. For the time being it will continue to be posted here, but by the end of the year it will migrate elsewhere, as the centerpiece of united Rick Kaempfer site, including all my media reporting, my original pieces, and more. I'll give you plenty of warning about that. 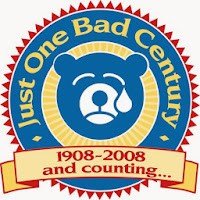 Just One Bad Century is getting an overhaul too. I've been working dilligently on revamping it, and it will be ready to go by spring training this year. I'm even heading down to Arizona for that relaunch. Details to come. In the meantime, check out the new JOBC Cubs Alamanac. It's an expanded daily blog featuring all the information I have written about a given day in Cubs history, plus a ton of new stuff. I've been researching it for months, and have more than 800 pages of new material to share this year.

So that's what's been going on with me.

Hope everyone had a great holiday break.
Posted by Rick Kaempfer at 9:36 AM