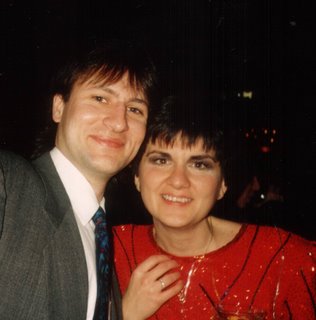 A dear friend of mine passed away over the weekend, Cindy Gatziolis. Robert Feder has a very nice write up about her in his column today. Cindy and I met when we both worked at the Loop in the late 80s/early 90s. (I think this is a photo from a Loop Christmas party circa 1992 or so). She was the promotions director there, when I was Steve & Garry's producer.

I interviewed her about her professional career at Chicago Radio Spotlight a few years ago (in 2008), but Cindy was much more than a great public relations person with an impressive resume.

To know her was to love her. I always believed the secret to her popularity amongst her relatives, friends, colleagues, and acquaintances was simple: She genuinely cared about people.

Before Bridget and I had kids we hung out with Cindy all the time. After Tommy arrived on the scene, Cindy was a big help. We stayed in touch long after we no longer worked together or lived near each other. When I was producing John Landecker's show on WJMK, I told her on the phone that I was nervous about our first gig for Landecker and the Legends. She showed up that night at PJ Flaherty's on the south side to lend support. When Swany and I released "The Radio Producer's Handbook", Cindy was the first in line to buy it at our first book signing--despite having just finished her first round of cancer treatments. She told me it was the day she debuted her wig in public. I never forgot that gesture.

Cindy and I bonded on another level. She was a closeted writer. She wrote some wonderful stories and sent them to me to critique. At one point we even met to work on a screenplay together--but life just got in the way.

At the time of her death, Cindy was working on a book about coping with cancer. She sent me the first few chapters a couple of months ago. I love the passion, anger, and insight of the first chapter's very first line. It says it all in bold capital letters: FUCK CANCER.

Believe me, Cindy, when we heard the news this weekend, we all said the same thing. It's just not fair that a beautiful person has been taken from us at the way too young age of 56.

The last time I saw her, she could no longer eat food and was on an all-liquid IV diet. She couldn't have weighed more than 70 pounds, but when she talked to us it was obvious the real Cindy was still there. Her voice was strong, her mind was sharp, and all she wanted to talk about was what was going on in our lives. We were joking and ribbing each other like we always had. When I finally got the courage to ask about her prognosis, she tried to be as upbeat as possible, but I could tell that she knew.

I hugged her when we left, and she thanked me: "I know you Germans don't hug". Her goodbye to us was more than a "I'll see you later." It was goodbye, and we all knew it. She sent me a few text messages the past few months, but the last time I texted her to check on her, Cindy didn't answer. I've been bracing myself for this day, but when I heard the news it still felt like a punch in the gut.

I spent all night trying to figure out a way to pay tribute to her, but I knew I couldn't properly paint a picture of how wonderful she was. So, I decided to do something I know she would have approved of. I'm featuring something she wrote to show you what a good writer she was.

One of the things we always teased each other about was the Cubs/Sox rivalry. Cindy was the biggest White Sox fan I ever met. In fact, her last post on facebook was a tribute to Paul Konerko on his last day with the Sox. When they won the World Series, I asked Cindy to write a piece explaining what it meant. This is what she sent me...

The White Sox won the World Series!
By Cindy Gatziolis


Hey did you hear, the White Sox won the World Series.

Now Cub fans, don’t get all crazy that I’m bragging. I’m still trying to believe it.

You hope your whole fandom that it will happen and each year you utter the proverbial “wait til”…well you know.

I’m often asked how I became a Sox fan, especially when people hear that I didn’t grow up on the south side (by the way Fox broadcasting—south side is two words) and neither did my parents. Dad was a westsider and mom was a way westsider as in Idaho.

Dad and his brothers George and Pete were White Sox fans. And those three men begat families of Sox fans. Dad even converted mom who used to be the diplomat and say she rooted for both teams. She showed her true colors in the South Side Hit Men summer of ’77 by entering or leaving a room depending on the team’s actions. Ironically, that was her last summer to follow the team.

Uncle George is still with us and when I spoke to him after the White Sox won the World Series, he was as happy as a kid.

My three siblings and I have many similarities but even more vast differences. Some of it in how we vote, some in how we work, and most certainly in what we all chose as professions. But our one shared emotion is a love of the White Sox.

The next generation is on board as well, my brother’s sons and my sister’s daughter. I give a lot a credit to my sister for indoctrinating her daughter who was born in Los Angeles and has spent nearly 10 years living in Connecticut, Yankee and Red Sox territory. Imagine my delight in hearing that Marinna, as an 8 year-old, set one little girlfriend straight who thought there was no such thing as White Sox…only Red Sox. East Coast bias anyone?

Last fall, the Gatziolis clan lived a dream, a dream shared by many a family. And while many have jumped on the bandwagon and seats will be harder to come by, we can take pride in that we were there long before it became fashionable.

I was on the verge of being a teenager when I spotted some cute guys in baseball uniforms such as Pitcher Bart Johnson, Second Baseman Mike Andrews and a gorgeous third baseman named Bill Melton. I can remember rushing home in September of 1971 to find out if he had the home run that would give him that year’s title. He did, and last summer, because of my line of work, I had Bill Melton in my car. I’ll never wash that seat again.

Through my nearly four decades of fandom, I never wavered. Eric Soderholm responded to my letter on biofeedback for the paper I was doing in college. Carlton Fisk became my annual early round choice in my rotisserie baseball league. Robin Ventura was the number 23 that I adored in this city.

Mom and I saw the game in which Dick Allen hit a home run to centerfield. I was able to really treat my dad to a great game when I worked at WGN Radio, which had great seats in the box next to the Daleys and two rows behind Chuck Comiskey. I think Dad was actually proud of me that day even though I’m pretty sure he couldn’t tell you what I did for a living.

In a softer gentler day, there was the time my sisters and I were headed to buy tickets and were stopped by a man asking us if we wanted his tickets. He was not a masher or a scalper, simply a businessman from Detroit (it was Tigers vs Sox) with extra tickets. Man those were great seats. It’s also the day I discovered the joy of focusing the binoculars on the Sox dugout. You could see Dick Allen smoking on the clubhouse steps.

Well, you can tell by this fan, that Sox fans are just as rabid as Cub fans. We may not be cute and cuddly. We’re not the hot babes in the bleachers that Arnie Harris always focused on. We’re just fans. We’re fans with this team because they’re part of our family. I often say, that with the exception of the living creatures in my life, and Farfo my stuffed dog who just turned 46, the White Sox are the most important thing in my life.

They connect me to my parents, my siblings and their children. And I hope that someday when I’m gone and one of those children has my seat from old Comiskey in their home, that it will be revered by their children as something special from Great Aunt Cindy and a cool connection to their favorite baseball team.

So take that Chris Berman.