Some More Pub For Father Knows Nothing

Many thanks to Tom Taylor's NOW column for publishing this today...

Special delivery - Rick Kaempfer says "When I was the executive producer of the John Records Landecker show on WJMK Chicago, I made phone calls from the delivery room to the show just before or after all three of my boys were born. The transcripts of those calls to Landecker are in my book 'Father Knows Nothing,' which is just being published. When my wife was in labor the third time, I left the hospital room to call the show while the anesthesiologist was giving her an epidural. Landecker and I joked on the air that the anesthesiologist was nicknamed 'Shakes' and that he was probably a heroin addict. Unfortunately, I forgot that the radio was on in the delivery room. The anesthesiologist laughed when he heard it on the radio, and said to my wife, 'I'm glad they're not talking about me.' She waited until after he finished with the delivery before she told him that actually, they were talking about him. Luckily, he had a good sense of humor." Rick's doing an appearance and book signing of "Father Knows Nothing" this Friday night from 5-7pm at the original Billy Goat in Chicago - and Landecker's expected to be there. So will WGN-TV's Rich King, and legendary Chicago TV anchor Joel Daly. Rick says "We're calling it Eckhartz Press Media Night, because we all share the same publisher, and we're all media guys." Rick's a co-founder of Eckhartz, and that's him in the picture with his wife Bridget. More about Father Knows Nothing here.

Here's the flyer for the event... 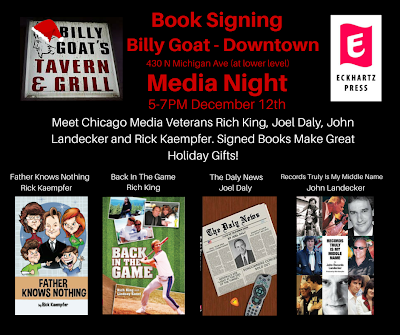 Posted by Rick Kaempfer at 9:50 AM