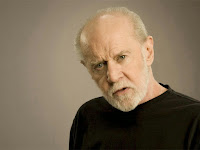 If he were alive today, George Carlin would be celebrating his 78th birthday. I met George a few times, but the story below is my favorite George Carlin story...


In American politics we often hear talk of “Pre-9/11” thinking. This usually involves national security debates, but I'm here to tell you that Pre-9-11 thinking also existed in the world of comedy.

I’ve always considered him one of the finest comedians that ever lived. He was courageous, utterly unafraid of saying what he really thought, and was consistently funny for five decades.

When we had him on the John Landecker show, I was not disappointed. He came into the studio with guns blazing, trying out brand new material that he hoped to include in his upcoming HBO Special.

The tentative name of the special at the time? “I kind of like it when a lot of people die.”

His routine was shocking even then (in a pre-9/11 world), but it was laugh out loud funny. We were holding our sides as he recounted the way he cheers when stupid people die doing stupid things and how he roots that they take down as many stupid people as possible with them.

Landecker and Carlin began riffing about stupid ways for people to die, and after the hilarious segment was over, George asked if he could have a tape of it so that he could use some of the material in his special.

Our station management thought it was such a funny interview, they submitted the tape for that year’s Achievement in Radio Awards. The tape went into the mail on September 9, 2001.

Needless to say, we weren’t nominated that year.

When Carlin’s special eventually did come out on HBO, it had a brand new name. It was called “Complaints and Grievances.”

Not quite as catchy, is it?

Timing is everything.
Posted by Rick Kaempfer at 7:24 AM