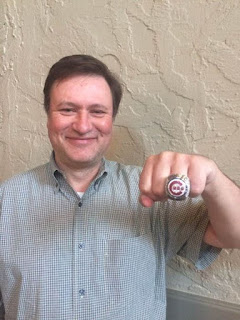 I share my season tickets with eight others, so we each only get one playoff game. Yesterday we had our "draft" and I got the second pick. I chose Game 2 of the World Series. (First pick chose Game 1)

Last year I didn't get to go because I had the last pick. It sure would be swell of the Cubs to make it to the Series again so I could see it in person. The only World Series game I have attended remains Game 2 of the 2005 World Series (White Sox vs. Astros). I was wearing my Kerry Wood jersey to that one (under many layers of winter coats to stay warm, and not get killed).

(Photo: I did get to wear a WS ring however. Thanks to the Cubs trainer Mark O'Neal.)
Posted by Rick Kaempfer at 9:18 AM