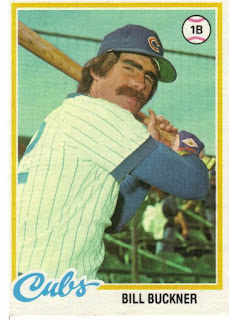 On this day in 1949, future Cub Bill Buckner was born. In his first season with the Cubs in 1977, Bill Buckner hit a respectable .284, but is there any doubt that Buckner's mustache was the finest mustache in the entire National League that year?

Billy Buck went on to have a great Cubs career, capped off by a batting title in 1980. In his seven plus seasons with the Cubs, Buckner never hit less .280. When the Cubs traded him early in 1984, it was only because they had another player to take his place at first base...Leon Durham.

Durham and Buckner, of course, share a common fate. Both of their outstanding careers will always be remembered for one little ball that went through their legs at the worst possible time.
Posted by Rick Kaempfer at 6:54 AM