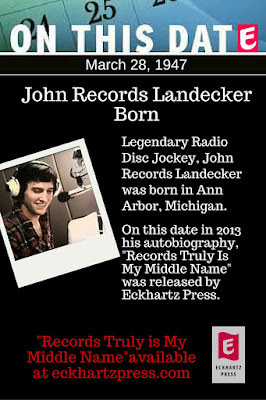 Three years ago today, Eckhartz Press released our best selling book "Records Truly Is My Middle Name" by John Records Landecker (and Rick Kaempfer). It was released on John's 66th birthday, which means that John turns 69 years old today. It seems like a good day to feature an excerpt from the book describing John's actual birth day. Enjoy this free excerpt, and happy birthday John!


There’s an old expression about the month of March; in like a lion and out like a lamb. Not necessarily. At 5:14 pm on March 28, 1947 in Ann Arbor, Michigan, the lion was roaring.

Outside their small apartment on Washington Heights in Ann Arbor there was a white-out blizzard accompanied by sub-zero temperatures. Inside, Werner & Marjorie contemplated their situation. Marjorie’s water had broken.

After clearing a path and walking very cautiously, Werner got Marjorie safely into the front seat and then prayed to the ignition gods that the car would start. It did. Since the weather was so bad, traffic was extremely light. That gave Werner the luxury of using the entire road to travel the relatively short distance to St. Joseph Hospital. With his right hand on the wheel, he used his left to open the window and reach out to help the overburdened windshield wipers keep the snow off the windshield so he could see where he was going.

Even though the temperature was below zero and the wind was howling, a small line of perspiration formed on Werner’s forehead. As was her way, Marjorie was calm and reassured her husband that he was doing a great job getting them to the hospital and all would be well. When the car finally came to a stop at the entrance to the hospital, things began to move rather quickly. At approximately 7:40 pm on the evening of March 28, 1947, Werner Sigmund Landecker and Marjorie Victoria Landecker had a son.

That son was me.

I came out face first; a metaphor for how I would live the rest of my life. My face was covered with deep bruises, and my neck was grotesquely out of alignment. The bruises would fade, but the neck treatment required me to be placed between two sandbags until the neck and head assumed the proper position.

When they were sure I was healthy, they realized I needed a name. John was their choice for the first name and obviously Landecker for the last. In a nod to my mother’s upbringing, they chose her maiden name, Records, as my middle name.

They had no way of knowing that their son would become a radio disc jockey, or that this name they had chosen would become my unlikely calling card.

Even though nobody believes it: Records Truly is My Middle Name. 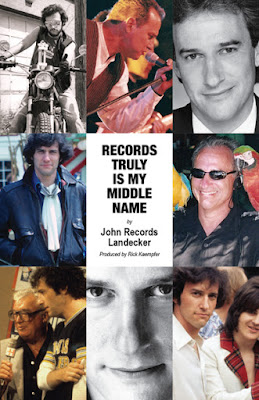 Posted by Rick Kaempfer at 9:43 AM