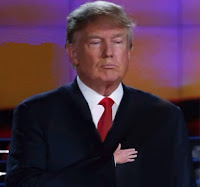 MSNBC's Chris Matthews is known for his tough questioning...when he allows the interviewee to actually answer the question. He calls his show "Hardball".

Donald Trump has agreed to appear in a townhall hosted by Matthews. It will air on March 30th.

I had vowed to stop watching Trump's appearances, but this one might be worth watching.
Posted by Rick Kaempfer at 7:57 AM