*Friday the 13th
Today is Friday the 13th. Why is this supposedly such bad luck? Most people think this goes back to the Last Supper when Christ and his apostles numbered thirteen. Less than 24 hours later he was crucified. If memory serves, it was on a Friday.
=Call me superstitious, but I’m not messing with that one.

Top 3 Political stories of the week.*
(*An equal opportunity offender)

1. Samual Alito Confirmation Hearings
WASHINGTON--The hearings for Associate Supreme Court Justice Nominee Samuel Alito were held this week.
=I know this just shows how odd I am, but every time Alito said "Stare Decisis" (pronounced Starry Dee Sisis) I thought--"Great Radio Name". Come to think of it, it's an even better Exotic Dancer name.
=Everybody is talking about Alito's wife being driven to tears, but there was an even more memorable moment if you ask me. Senator Charles Schumer (D-NY) said that Alito had "special shoes" to fill if he replaces Sandra Day O'Connor. The camera cut to Alito and he raised his eyebrows and smiled. Apparently he had no idea how exotic the perks were.

2. Ted Kennedy's children's book
BOSTON (AP) Senator Ted Kennedy and his Portuguese Water Dog, Splash, have co-written a book called "My Senator and Me: A Dog's Eye View of Washington D.C." The book is due to be released in May.
=Ted Kennedy has a dog named "Splash?" Now that's a wacky sense of humor.
=He also has a fish named "Mary Jo"
=I wasn't there for the birth because he didn't call anyone for eight hours, but you should see his cute litter of kittens..."Ick," "Quid," and "Chappa." I'm not sure about the birth order.


Every Picture Tells a Story 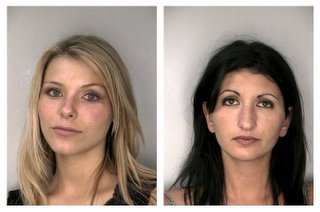 *I love Mug Shots
The website TheSmokinggun.com put out it's list of top 2005 mugshots this weekend. Check out the full list at the link above, but here are my favorites. See if you can identify them...
=The two woman above are the cheerleaders who were arrested in the bathroom stall...together. I include them because they were with the Carolina Panthers; this weekend's Chicago Bears opponent. You know the smiling guy below. I included him because he was in the news this week, announcing that he would not seek to get his old job back. The number #1 mug shot on their list is the guy with the paint on his face. He was arrested for stealing spray paint, and then inhaling the fumes from paint cans. That's got to be one of my all-time favorite pictures. Do you think he was guilty? 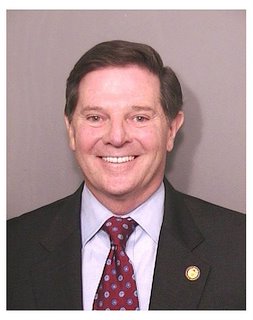 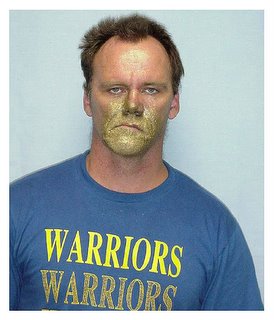 =As a Chicagoan, I do have one request: Please ask George Wendt, Dennis Franz, and Jeff Garlin to stop bragging about their Chicago roots. It's starting to take a toll on our rep.

=By the way, Baltimore was chosen as the fittest city in America by the same magazine. No doubt this is due to the svelte frame of Baltimore Sun columnist Jack Germond.


*Inventor of LSD celebrates 100th birthday
GENEVA, Switzerland (AP)- Swiss chemist Albert Hoffman, who discovered the mind-altering drug LSD and was its first human guinea pig, celebrated his centenary Wednesday — in good health and with plans to attend an international seminar on the hallucinogenic.
=That seminar will be the first international seminar illuminated exclusively by black light.
=His children; Rainbow (75), I.C. Spots (70), and Microbus (69), sent their best wishes from Haight Asbury in San Francisco.

*Marcus Vick arrested
SUFFOLK, Virginia--Marcus Vick, the quarterback for Virginia Tech booted off the team this week for his behavior on and off the field, was charged with pulling a gun on three teenagers during an altercation in a restaurant parking lot. Vick has announced he is turning pro and will enter the NFL draft.
=Who would draft a guy who was kicked off his college team, intentionally tried to injure a player in a game, and has been arrested multiple times?
=He was "packing" heat, right? I say Green Bay takes him.
=One team that definitely won't take him? Saints.

*Mouse pays man back for tossing him out
FORT SUMNER, N.M--Luciano Mares, of Fort Sumner, caught a mouse inside his house and wanted to get rid of it. "I had some leaves burning outside, so I threw it in the fire, and the mouse was on fire and ran back at the house." The home and everything inside it was destroyed by fire.
=I believe this is what John Lennon called "Instant Karma."
=The mouse was heard singing this song:
"M-I-C. See me run away. K-E-Y. Why? So I can burn your...H-O-U-S-E."

*Movie Review
=I don't like doing movie reviews because I see so few of them, but if you get a chance, you simply have to see this one. It's powerful. 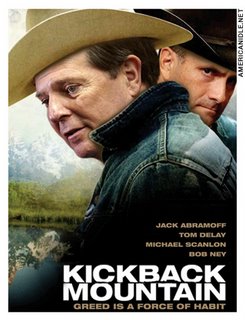 Regarding last week's 'This Week' rundown
"As Johnny Carson said--Good stuff. Keep this up and you should have your own column"
--O
"Very funny. I laughed out loud while reading your blog (especially about Clinton and The Who) and had to explain it to my seatmate."
--A
"Awesome. I know how hard this is to do. I even made you my home page, but, c'mon: Ice Cold Germans? Are there any other kind?"
--S

Regarding Dave Stern's guest blog about dads of newborns.
"Awaiting the arrival of my third son I got thirsty and left the room for a diet Coke. The soda machine was nowhere near the delivery room so it took some time to get back to the room. By the time I returned , my 10 pound son was already on his way out. Hey I was thirsty!"
--J


Regarding Sunday's post: The Santa Threat
"I loved the Santa article. I still use the Santa threat--but they aren't buying."
--S


Regarding Suburban Man
You know you're a suburban guy when:
=You own a grill and a complete set of matching grill tools
=You can debate the finer points of 10-10-10 versus 5-10-5 fertilizer (or even have an inkling what those numbers mean)
=You not only know what they're talking about on the traffic report, but actually listen
=Just thinking about parallel parking makes you break into a cold sweat
=You've actually comparison shopped for patio furniture
=A trip on the subway is an excursion for your kids, not transportation
=You can't remember the last time you haled a cab without a phone
--W


Miscellaneous
"I look forward to your goofy/off beat humor every morning, but my favorite so far was your contest winning poem."
--M
"Good Content. Your son's favorite joke (Monday's post) is a keeper."
--D
"I've got you bookmarked and plan to check it out regularly"
--R
"You are a sick, twisted weirdo. Then again, I like sick, twisted weirdos."
--T

This Week in Severance

*I just got back notes from my editor regarding six of the chapters in my upcoming satirical novel about the media business ("Severance"). It's getting there; almost no changes this time. Although any similarity to actual persons is strictly coincidental, people who have read the chapters I'm working on this week think that Rush Limbaugh and Dan Rather won't be pleased. I have no idea why.

*Every week I'll provide links to articles that explain the current (sad) situation of the media. That, after all, is the inspiration for my novel.