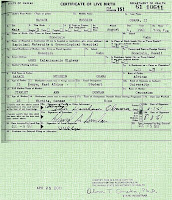 The Kansas Secretary of State is seeking more information about President Obama's birth certificate before he will approve putting the sitting President of the United States on the ballot in the fall. Requests were to be sent to officials in Hawaii, Arizona and Mississippi in an attempt to secure copies of the president's birth records.

The full story is here in the Topeka Capitol Journal.

Kansas--the state Obama's American mother was born and raised in--is questioning whether or not he is an American citizen. I'm not one to make fun of entire states, but Kansas really is an embarrassment.

Although, let's be honest. Even if they take him off the ballot in the fall, how many votes will that really cost the president?
Posted by Rick Kaempfer at 7:16 AM