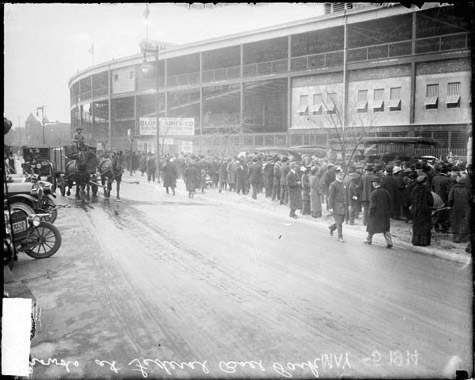 I don't need to tell you that today is the 100th birthday of Wrigley Field. If you want to know what it was like on that first day one hundred years ago, we have a full report, including quotes from the 1914 Chicago Tribune. It's all right here.

For today's A/V Club, we've chosen to highlight Steve Goodman's ode to the park and it's fans. Watch him perform "A Dying Cub Fan's Last Request" from a rooftop overlooking the ballpark.

What is Theo Epstein thinking watching this birthday celebration? He's not digging the constant references to the losing. (And by the way, people keep saying there have been no championships, but that's not true. The Bears won several in Wrigley, and the Federal League Whales won one too).

The rest of the usual features are still here today as well. Today's Cubs birthdays feature an MVP, a member of the last pennant winning Cubs team, a backup outfielder from the 20s, and the player they we had to take in order to get rid of Milton Bradley.

Today's historical event was a cosmonaut tragedy in Russia. Where were the Cubs?

If you want to know where I'll be, I'll be at Wrigley Field helping to celebrate the old gal's birthday. I'll post some pictures either today or tomorrow. 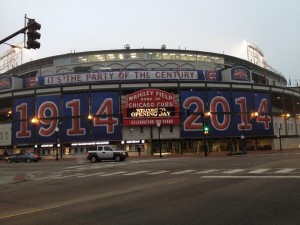 (photo: Bernie Tafoya)
Posted by Rick Kaempfer at 7:32 AM