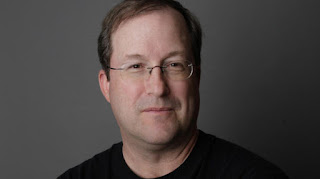 I interviewed Lin back in 2008 for Shore Magazine, and here is that piece...

Lin Brehmer has been hosting the morning show at rock station WXRT (93.1) in Chicago for nearly two decades. He is known for his irreverent wit and deep love of rock and roll. His motto, according to his official station bio, is borrowed from the writings of Gerard Manley Hopkins: “Flesh fade and mortal trash fall to the residuary worm’, you and I might as well Rock and Roll.”

To borrow a phrase from John Huston in Chinatown: “Under the right circumstances, a man is capable of just about anything.”

Mick Jagger in a one-on-one interview at the Ritz Carlton Beverly Hills. It was for a radio special for his solo album, Goddess in the Doorway. He was affable and expansive and thoroughly charming.

Norah Jones throwing a fit when I was told to introduce her at Ravinia. Not sure she was expecting an emcee. Her road manager had me ejected for saying on stage, “Ladies and Gentleman, Norah Jones.”

You should really be a morning guy.

I’ve really had an amazing opportunity to see every major band of the last thirty years when no one knew who they were. It gives you some perspective. U2, R.E.M., Nirvana, Stevie Ray Vaughan, you name it. I saw them all in small clubs. In the late ’70s and throughout the ’80s, I went to well over 150 concerts a year. Also, we aren’t really conscious of what people are doing while they listen to our shows, but now and then, a couple will come up and say, “We were listening to your show when our first child was born.” To be touched like that is the best perk of the job.

Something listeners don’t know about you

I get stage fright. Since I’m on stage all the time, I’m pretty good at pretending I don’t. I never eat dinner if I know I’m emceeing any event where I will be addressing a large number of people. And when I’m waiting to go on stage, I pace or pantomime pitching wind-ups.
Posted by Rick Kaempfer at 8:10 AM