John posted this on his facebook page yesterday. He tells the full story in his upcoming book, but this is the photo and the audio of his play by play. John Landecker doing play-by-play of a Foosball game at the Playboy Mansion. Elton John and Bernie Taupin versus Hugh Hefner and Barbie Benton. Note the hilarious line by Elton John towards the end. 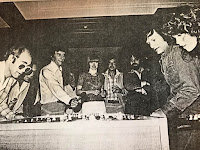