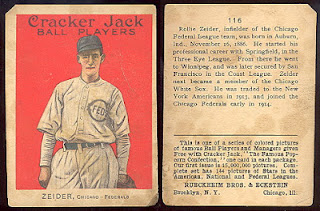 On this day in 1883, future Cub Rollie Zeider was born. He remains one of only two men to have played for three different teams in the same city (he played with the Cubs, the Sox, and the Federal League Whales).

His last three seasons in the big leagues were spent with the Cubs, serving as their utilityman. He played every position on the field except catcher, pitcher and centerfield. Rollie's time with the Cubs coincided with the first three years the team played at what is now known as Wrigley Field (1916-1918).

Once called "Hook" because of his beak-like nose, Zeider later became known as "Bunions" when he contracted blood-poisoning after a Ty Cobb spiking sliced into his bunion.
Posted by Rick Kaempfer at 7:19 AM