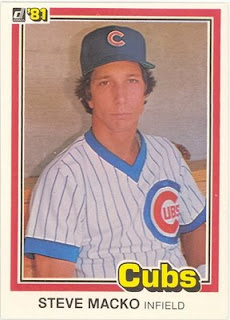 On this day in 1982, Cubs infielder Steve Macko passed away. His story is one of the most tragic tales in Cubs history.

His father was a coach with the Cubs in 1964, and Steve was one of their hot young phenoms. He was a middle infielder, and made it to the majors in 1979. In August of 1980, he was injured in a collision at second base. During the physical examination after the injury, the doctors discovered that Macko had cancer.

He never played with the Cubs again. In his final season he hit .300 and had a 1.000 fielding percentage.