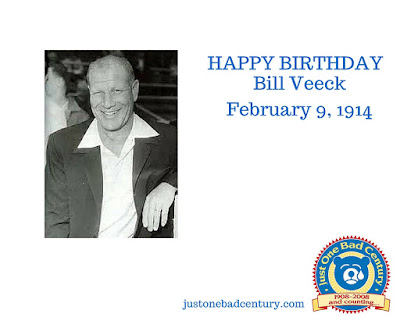 From Just One Bad Century...

~February 9, 1914
Wrigley Field (then known as Weeghman Park) was just a few months away from opening its doors for the first time when a boy was born to Chicago sportswriter Bill Bailey and his wife. Bailey’s real last name was Veeck, and he named his son after himself, William Veeck Jr. The elder Veeck became the president of the Cubs when Bill Jr. was still a little boy, and was probably the greatest innovator of his time. He was the first man to bring Ladies Day to the big leagues, and was the first to realize how important it was to broadcast the games on the radio (The Cubs were the first team to do so). While other teams were afraid of giving away the product for free–Veeck Sr. saw it for what is was–a free 3 hour commercial for the team and the ballpark. 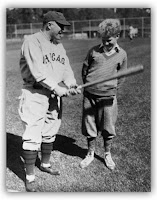 At the age of 11, young Bill started helping out his dad at the ballpark. He worked on the grounds crew, as an office boy, and a vendor. (Photo: Bill with manager Joe McCarthy) As a fifteen year old kid, he was taking care of the Ladies’ Day passes at Wrigley Field by day, and was tagging along with baseball hero Hack Wilson to the speakeasies in Cicero by night.

“With a father who ran a ball club, my boyhood was the kind most kids dream about,” Veeck says in his autobiography. It’s no wonder that Wrigley Field meant so much to him. Young Bill wasn’t only hanging out with famous ballplayers like Wilson, Grover Cleveland Alexander, and Charlie Grimm, he really felt like he was part of the team. After his father died in 1933, Veeck quit college to work for the Cubs full-time. He eventually rose to the job of Treasurer, but when he wasn’t given the job of President a few years later, he moved on (in 1941). His most lasting accomplishment at Wrigley Field is something that still draws fans into the ballpark seventy years later…the ivy on the walls. Veeck was the one that planted the ivy in 1937.

In his final years Veeck re-adopted the Chicago Cubs. He was a frequent sight at Wrigley Field, often found sitting in the bleachers without a shirt. He had owned several different teams in his long baseball career (The Browns, the Sox, the Indians, and the Brewers), but when he could go to any ballpark in the big leagues in any town in America, there was only one ballpark he came to again and again as a fan. He came home to his favorite place; the place of his childhood dreams, Wrigley Field.
Posted by Rick Kaempfer at 6:48 AM