"Monkey in the Middle" by Dobie Maxwell 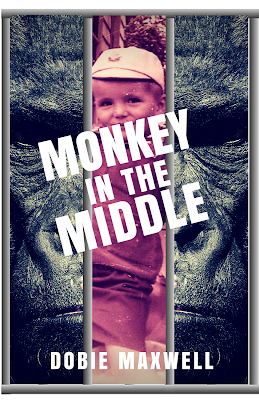 For years Dobie Maxwell has been told that his incredible life story should be a book. This is it. Dobie was born in Milwaukee, to a biker father and drug abusing mother. When he was only five months old, his mother abandoned him and his two older siblings. Dobie was separated from his siblings and sent to be raised by his paternal grandparents. It was there, in his grandparents’ neighborhood, that Dobie befriended another societal misfit. The two became best friends.

Years later as Dobie pursued his dream as a professional comedian and radio personality, that same “friend” robbed a local bank. He used Dobie as his unknowing getaway driver as they took a cross country trip to Las Vegas in a rental car in Dobie’s name. The same friend robbed the same bank again two years later. This time he did it disguised as a Gorilla Gram–a robbery so audacious it made all the local television news programs. Who would have done such a thing? Law enforcement thought it just might be the work of a comedian, and all trails led to Dobie.

Dobie was dragged into the story against his will, and eventually had to make the excruciating choice of either testifying against his life-long friend in court or going to prison for crimes he did not commit.

Monkey in the Middle is hilarious, tragic, joyous, dark, and smart. In short, it’s just like the real life narrator of the story; Dobie Maxwell himself.

Monkey in the Middle is available for pre-order now! It ships on March 14th.
Posted by Rick Kaempfer at 12:43 PM