Ed Dunkelblau, Ph.D. is a psychologist, speaker and consultant dealing with corporations, healthcare organizations and educational institutions on the topics of Humor, Health and Emotional Intelligence. Dr. Dunkelblau’s work has been has been featured in the New York Times, Chicago Tribune, USA Weekend, Readers Digest, Jet Magazine, on CNN and NPR. He can be reached via his website at www.teacheq.com or at drlaugh01@aol.com

Dr. Dunkelblau was also a regular guest on the John Landecker show, and when I contacted him to blog about his recent trip to New Orleans, he graciously submitted this.


"Humor and Tragedy in New Orleans"
By Dr. Ed Dunkelblau


Just days after Mardi Gras I was walking down a wide city street looking at the empty but mostly intact houses that lined the road between trees and piles of refuse emptied from the moldy interiors. I passed an attractive, yellow, 2 story home that was also abandoned, but looked Ok. Ok, that is, until I realized that it was sitting in the middle of the street, having been separated from its foundation 30 feet away.

The flood waters of New Orleans have done indescribable damage to the neighborhoods, economy and the people of the “let the good times roll” city.

It was in the shadow of this incredible disaster that a colleague of mine, Patty Wooten, and I were invited to speak to the people of New Orleans on the topic of Humor and Tragedy. Our task was to provide a life affirming message of hope while not dismissing the hurt, sadness and pain being felt by virtually everyone who remained after the floods. Patty and I are both Therapeutic Humorists, both clinicians and both winners of the Lifetime achievement Award given by the Association for Applied and Therapeutic Humor.

Speaking on Humor and Tragedy, though not easy, was familiar to us, having given a number of presentations shortly after the 9/11 attacks.

We were prepared for the sorrow, the horrifying stories of loss and despair experienced by the people of New Orleans but we weren’t prepared for the scope of the devastation. It went on for miles and miles. And this was 6 months after the disaster!

Together and separately we gave a total of 6 speeches to professional and general public audiences throughout the area. The responses that we received have changed our lives forever.

The people of New Orleans were ready to laugh. Patty and I spoke about how humor and laughter can be a vacation from sorrow and loss and these folks were certainly ready for a vacation. Our jokes and stories were never funnier and our message never more appreciated than by those in attendance.

We spoke about how humor provides perspective, connects people and how it can help people feel more in control. We helped them identify what they found funny and how humor can help them physically and psychologically.

We talked about how humor can reflect common fears or problems. 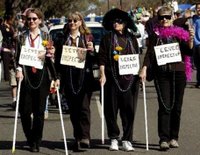 As it was days after Mardi Gras, we found some examples of humor from the local press and included them in our presentation. A crowd favorite was a group of women dressed as if they were blind with dark glasses and white canes and wearing signs “ LEVEE INSPECTORS”


We gave the audience suggestions for bringing more humor into their lives i.e. Find a humor buddy, someone who understands your sense of humor; Seek out things that are funny, schedule humor breaks into your day, etc.

Finally, we cautioned them about the risks of humor: Avoiding racist, sexist or any other “ist” humor; know your audience, etc.

The most moving part of the presentations came at the end. We invited the audience members to share their stories of humor, survival and courage.

One that stands out was shared by a woman quoting a police report that described how some rescuers approached a house where the family had already evacuated to safety but the pet golden retriever was unfortunately left behind. Rescuers were eventually able to get back to the house where they saw the dog desperately swimming around the living room trying to keep its head above the water. The story had a happy ending and the dog was saved but the rescuers were confused about why the dog continued to swim rather than find safety on the floating sofa. The owner laughed and shared that he is a very good dog and he knows that his isn’t allowed on the furniture.

Experiencing the resilience, tenacity and kindness of the people of New Orleans changed our lives. I hope that with our message of humor, personal power and caring we were also able to positively touch theirs.

To see any of the previous guest bloggers, click here: http://rickkaempferguestbloggers.blogspot.com
Posted by Rick Kaempfer at 12:04 AM


When my son Tommy told me early last year that he had some ideas for new video game designs, I encouraged him to share these ideas with the company that designs them. That’s the marketing/advertising man in me. I thought the ideas actually showed promise, and although it was a long shot, wouldn’t it be a marketing coup for a company to promote a new product actually inspired by one of the product’s devoted users?

Tommy was in third grade at the time, and this is the letter he sent to Mattel, Inc, the makers of Pixter—a hand-held video game for kids under 12. I didn’t help him with the letter at all. This is totally his own creation.

I have an idea for two new Pixter software cartridges. I will be very happy if you take my ideas.

The first one is called “Architecture Masters.” It will be for kids that want to have a chance to build buildings on their Pixters. The activities will be: Build a Building, Color a Landmark, City View and Make Materials.

The other one is called “Watermarks and More.” This one will be for kids that are special effects lovers. The activities are: Free Draw, Watermarks Fun, Bleed Up, and 3-D Effects. A bonus is that it will have up to sixteen special effects.

I warned Tommy that the odds of getting a response were against him, but you never know, maybe somebody will read it and consider it. They did more than that. They sent Tommy a very special letter. Here it is without corrections...

Thank you for taking the time contact Mattel to share your idea with us. We always enjoy hearing from our young consumers and are happy to have this opportunity to respond to your letter personally.

We appreciate the time and energy you took to develop your suggestion. However, due to restrictions from our lawyers, we cannot accept unsolicited ideas from anyone outside of our company, except from professional design houses and toy brokers. We also cannot distribute or discuss your letter with others at Mattel. We have a big staff of our own designers to develop new toys and games—sometimes it takes several months or longer to develop a toy from concept to production.

We understand that you worked hard on your letter, so we are returning it to you, unexamined, so that you can share it with your friends and family.

As you might imagine, Tommy had a few questions.

"If they didn’t examine my letter how did they know I offered designs?" he asked.

"Why would lawyers tell them they couldn’t listen to kids?" he asked.

"Unfortunately," I explained, "these companies are afraid of lawsuits. If they come out with a design that is anything like a kid's design, the kid could claim it was his idea and sue them for lots of money."

"That's just the way it is these days," I said.

Tommy was very disturbed by the letter, but he dropped the subject and never brought it up again. He also stopped caring about Pixter—his formerly favorite toy.

The Pixter sits untouched in his little brother’s room.

Oh well. I'm sure Mattel has lots of other customers. If not, at least they won’t be facing a lawsuit.
Posted by Rick Kaempfer at 12:05 AM