Minnie Minoso was one of the all-time greatest Chicago White Sox players. He set a major league record in 1980 when Bill Veeck brought him back for two at-bats, allowing him to have played in the major leagues in 5 different decades (40s, 50s, 60s, 70s, and 80s).


During this baseball All-Star week, it only seems fitting to write about my encounters with a former All-Star--former White Sox great Minnie Minoso.

Minoso was the center of controversy last year when a special Hall of Fame committee decided that he was not qualified to be inducted into the Hall of Fame. This caused quite a bit of outrage amongst White Sox fans (and several baseball historians), because it was probably Minoso's final chance to get in the Hall.

I've met Minnie many times over the years. He lives in Chicago, and every time I called him up and asked him to appear at one of the John Landecker Show's live broadcasts, he happily agreed. He would show up with a pile of promo pictures and patiently autograph them for anyone who wanted one. He is a heck of a guy.

Now if you've ever heard Minnie speak, you know that his English is very shaky--even after living here for more than fifty years. (He was supposedly the inspiration for the SNL character who always said "Baseball has been berry berry good to me.") So why would we have someone who could barely speak the language on our radio program? Well, the event we invited him to every year was our annual Mini-Golf fund raiser. We invited several local celebrities to participate, but Minnie was always our star attraction. Bob Sirott from "Fox Thing in the Morning" always sent over a TV crew to simulcast Minnie's portion of our show. Why? Same joke every year.

I'm not qualified to render an opinion about whether or not Minoso belongs in the baseball Hall of Fame, but I will say this...

Minnie has been berry berry good to me.
Posted by Rick Kaempfer at 12:03 AM 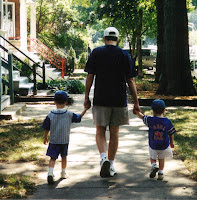 
I get a fair amount of e-mails from readers, but I usually answer them one-on-one. The following e-mail, however, had to be shared in a public forum. My sons insisted.

Rick,
Your Suburban Man column about taking the boys to the city was precious. I hope they appreciate what a fun dad they have.
Mary

I printed out the e-mail and showed it to Tommy, and he couldn't believe it. He said: "Didn't she read my guest blog from last Father's Day?"

I'm guessing she didn't. He has graciously allowed me to reprint a portion of it here.

I’m going to give you my top five most annoying things about Dad.

5. Dad does this ‘short-term memory’ thing that drives me crazy. Once he thought I was my brother, Johnny. “Well, hello, Johnny.”
“Daaaad...”
“Johnny, cut it out.”
“Daaaaaaaaad, I’m TOMMY.”
“Don’t be silly.” I ran off to Johnny to show him.
“This is Johnny.”
“You’re getting weird, Johnny. That’s Tommy.”
I don’t EVER want that to happen again.

4. Og. I just can’t take this anymore. Once I told Dad that his jokes were twice as old as him. He took that as a challenge. The very next day, he gave me a smelly joke about Calvin Coolidge. “I guess Mr. Coolidge was a pretty calm guy,” I remarked after the joke. “That’s the point of the joke,” he replied. I heard quite a few VERY weird jokes that day. I haven’t really heard much of his ‘new material’ again.

3. This thing Dad has done for the last 10 (that’s how old I am, for your information) years has annoyed me for life. He says the lyrics of songs that I think s t i n k.

2. This is pretty much the same as 3, but he SINGS the songs instead.

1 (Tie). Dad’s voices. The worst is his voice of Grover. We used to have a punishment system when he would hear me talking with Johnny at night. First warning, he would take away our teddy bears. A second time, there would be no Nintendo DS. Third, someone would go upstairs in Mom’s and his room. Fourth, (although impossible), Dad would sing all the songs on his iPod as Grover. I’ve hated the Grover (and technically, Yoda) voice since I was 4 or 5.

Then I showed Mary's e-mail to Johnny and Sean.

"Don't you think Mary is right?" I asked.

"Annoying how?" I asked. Johnny and Sean answered in rapid fire fashion, almost without breathing to pause.

"When you pitch, you throw it at my head."

"I hate your Goofy voice."

"You tackle and tickle and pinch"

"Your 'forever hugs' are annoying, when you say that you'll hug me so long that I'll have to bring you with me to school, and we'll still be hugging when I get married unless I say the passwords."

"And you change the passwords. That's no fair."

"Whoa," I said. "Hold it right there. That's totally unfair. There are only two passwords, and you know both of them."

Johnny said one of them: "Go Cubs."

And Sean rolled his eyes as he said the other one: "Dad looks so young."

Does that answer your question, Mary? Let's just say that "Fun" and "Dad" are never uttered in the same sentence in my house.

Although...that could be the new password.
Posted by Rick Kaempfer at 12:04 AM