This week's Chicago Radio Spotlight shines on Greg Easterling, the overnight host at WDRV, The Drive. Greg has had a long and interesting career in Chicago radio. Read the entire interview here.
Posted by Rick Kaempfer at 10:27 AM

Leo Durocher on the Judy Garland show. Judy is not a baseball fan.

Posted by Rick Kaempfer at 4:55 PM

The latest issue is out and includes my "Family Room" essay on the back page. This one is called "Summer Camp Blues". It's about my mixed emotions about sending Tommy & Johnny to summer camp this year.

Posted by Rick Kaempfer at 8:05 AM

This made me laugh... 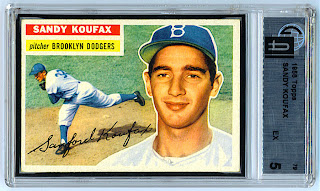 $everance is now also available as an e-book. You can read a great big chunk of it if you click here.
Posted by Rick Kaempfer at 6:03 AM


I think that Cubs loss last night really affected people, judging by my bulging e-mail box. Here's one from "AS."

You know what? You’re right.

And as I look at the top of the standings and see my childhood favorite sitting there, it’s like even MORE taunting from Beelzebub (who looks a great deal like Bud Selig in my dreams).

I grew up in Wisconsin . I rooted for the Milwaukee Brewers in the AL and the Chicago Cubs in the NL. Everything was nice. It was almost perfect. Well, with the exception of the number of championships I actually saw, which was ONE. The 1982 AL pennant. I actually went to see a World Series game! I don’t remember a lot of it, but I know that I was there (enjoying a great deal of Old Style). I think I have a stub somewhere to prove it. Back in 1982, it didn’t cost half a year’s salary to get a ticket and the Wisconsin drinking age was 18. SCORE!

Then, in 1984, I moved to the “other side” of Lake Michigan to continue school. Without the internet, Brewers news was scarce. It’s so much easier to follow your out-of-town favorites, now. Anyway, I had cable (and thus WGN), so I got to see my NL team. Driving to Chicago for a game wasn’t so bad. I could glance at the standings and see that the Brewers were in the midst of years of basement dwelling suckitude, so they NEVER appeared on national television broadcasts. Once Paul Molitor (my all time favorite player) and Robin Yount left town, I could barely name anyone on the roster.

When Bud Selig got the bright-assed idea to move the Brewers to the National League and into the Cubs’ division, I was faced with a Sophie’s Choice. Pick one, dummy. Bud says you have to. I think lots of southern Wisconsin baseball fans were faced with the same dilemma. It wasn’t difficult to hate the White Sox when the Brewers were in the AL . They’re the WHITE SOX, for chrissakes. They wore ugly uniforms, played in a crappy stadium, and their fans came to Milwaukee and threw beer and peanuts at the locals. My first live baseball game was a Brewers/Sox doubleheader with a two hour rain delay tossed in. I was in sixth grade. I’ve never seen so many drunks in one place in my life. There was even a fight on the field. The Sox wore those hideous, untucked, beer league softball uniforms. I came home after nine hours at the ballpark, reeking of beer and repeating many new colorful phrases that I had learned, thanks to the Sox and Brewers fans screaming at each other. My parents were so pleased.

I didn’t buy this whole “we wanted to establish a rivalry with the Cubs” bullspit that Bud Selig was dishing out when he moved the Brewers, either. What makes more sense? Putting Milwaukee in the AL Central with the Sox, Detroit , Minnesota and Cleveland , or sticking them with the Cubs, St. Louis , Houston , Cincy and Pittsburgh ? The AL Central actually resembles the NFC North (then Central) where there are long time, established, bitter football rivalries between folks in the SAME STATES, Bud. What a doorknob you are.

So, anyway….I didn’t make an immediate choice, but logistic came into play. I moved away from Wisconsin (a move I still question to this day). Which team does my local sports guy talk about now? Cubs. Which team can I see on TV? Cubs. Which team did my little boy (who was born in South Bend ) like and ask to see? Cubs. Which team have I seen in person the past 20 years? Cubs. A natural progression. I had chosen the Cubs without consciously doing so. However, I can never root against the Brewers. When the Cubs play them, I root FOR the Cubs, but never really against the Brewers. I can’t yell at the TV and call them colorful names. I just sit there, watch the game and cheer when the Cubs do something right. It’s weird. I LIKE to hate the opposing team. I like to call their star players “pansy asses,” and the like.

Now, the Brewers are sitting in first place and the Cubs are blowing no hitters and five run leads. I’m in HELL. The Brewers are waving at me, taunting me, saying, “You never stopped being a Packers fan after you left, did you?” Football is different. They play once a week and you can see just about any team you want at any time. There was never a lack of coverage. It was easier to stick with them, even in the Lindy Infante era. Plus, being around Chicago Bears fans in 1985 was OBNOXIOUS, especially to someone who had just left Wisconsin . It kind of cemented my Bear hate for eternity. Plus, my ex was a Bears fan. ‘Nuff said, there.

Sorry to ramble, but I’m pissed. I made a SACRIFICE for these guys! I CHOSE THEM over my other baseball love, and what have I gotten since? Heartache. Steve Garvey and Bartman balls. Sammy Sosa, corked bats and steroid accusations. LaTroy Hawkins, Corey Patterson, Bob Howry and now Kevin Gregg. Dusty Flippin’ Baker. What did I do to deserve this? Oh, and did I mention my spurned team is in FIRST FREAKING PLACE?

Sigh.
Posted by Rick Kaempfer at 9:00 AM

There is an on-going discussion about the state of the media (specifically as it relates to my book $everance) on the ENC Press page at Facebook. If you're on Facebook, and you've read $everance and would like to participate, click here.

By the way, this week is the two-year anniversary of $everance's release. If you'd like a $everance refresher course...

My original interview with John Records Landecker is here.

The first three chapters of the $everance audio book is here.

The $everance radio commercial is here.

And a sample chapter of $everance is here.

It's still available for purchase too. You can get it here for a very reasonable price.
Posted by Rick Kaempfer at 7:32 AM 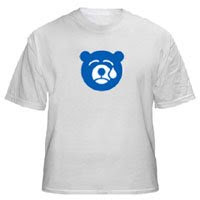 Sold a bunch of these last night. It really does help you recover from a loss like that monstrosity on Tuesday...

Get one and see for yourself.
Posted by Rick Kaempfer at 7:24 AM

Did you see that game?

Wow, does it suck to be a Cubs fan.

I mean, seriously, every now and then a mirror is held up and I see what it is that I have become.

"Think you're safe with a five run lead in the eighth during a no hitter? HA HA HA HA HA HA HA HA HA HA! Right now I'm whispering in Kevin Gregg's ear saying 'Channel your inner Mel Rojas/Latroy Hawkins/Dave Smith/Doug Jones/Terry Adams/Kyle Farnsworth and throw the one thing the fastball hitter won't expect in the bottom of the ninth...a fastball right down the middle.

Whoops? Did he hit out of the ballpark?

Tomorrow I'm going to add up the number of hours I've spent watching this team, figure out how many years of my life I've lost, put a monetary value on it, and send them a bill.
Posted by Rick Kaempfer at 11:21 PM

I thought this was pretty cool. You may or may not agree...

I must admit, I was a little surprised when I saw this on the site meter this morning because I haven't checked it in a long time. There have now been more than 200,000 readers of my blogs this year.

Thank you for checking 'em out.

It makes me feel like I'm not just a guy sitting in a basement cranking this stuff out (although that's exactly what I am).
Posted by Rick Kaempfer at 10:20 AM

The Cubs are in the midst of a pennant winning season.

*On the same day the Cubs survive a 10-9 Wrigley Field slugfest against the Giants thanks to homers by Hack Wilson (he hit two), Rogers Hornsby, Charlie Grimm, and catcher Earl Grace, George Eastman demonstrates the first technicolor movie (in Rochester New York) 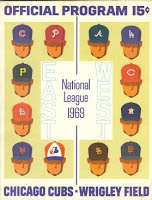 The Cubs are in the midst of one of their most memorable seasons.

*The bottom of the Cubs order, Jim Hickman, Randy Hundley & Don Young, drive in all four runs to lead Bill Hands to victory over the Astros at Wrigley Field. A few hours later the final episode of Star Trek airs on NBC. 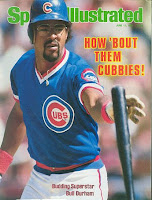 The Cubs are hoping to make the playoffs for the first time since World War 2.

*On the day that Ryne Sandberg is hit by a pitch with the bases loaded to break a 0-0 tie in the eighth inning versus the Cardinals, Cyndi Lauper's song "Time after Time" becomes the #1 song in the country.

The Boys of Zimmer are taking Chicago by storm.

*Rick Suttcliffe wins his seventh game of the season as the Cubs beat the Cardinals 5-2 despite Doug Dacenzo's unsuccessful attempted steal of home plate at nearly the exact moment that 10,000 Chinese soldiers are blocked by 100,000 citizens protecting students demonstrating for democracy in Tiananmen Square, Beijing.
Posted by Rick Kaempfer at 12:04 AM

Thanks to "JH" for pointing this one out...

Posted by Rick Kaempfer at 2:06 PM 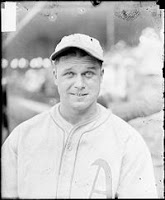 On this day in history the Cubs acquired the legendary Hall of Fame slugger Jimmie Foxx. Unfortunately for the Cubs it was 1942, not 1932. Oh what a difference a decade would have made.

His nickname was THE BEAST.
Posted by Rick Kaempfer at 4:03 AM 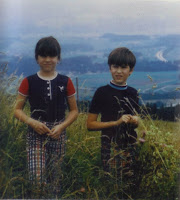 I just posted my latest Father Knows Nothing column at NWI Parent. It's called "The Hills Are Not Alive," and it's about the worst summer of my life.
Posted by Rick Kaempfer at 8:48 PM