Got this clarification from Bob Kruchten regarding his appearance w/father and son on ESPN this weekend...

"Hello Rick - ESPN aired the piece featuring Dad, Paul and I and a 3 generation Yankees family titled 'Generational Allegience' already once on SportsCenter this morning and told that it will air a couple of times throughout the weekend on both ESPN and ESPN 2. Did not see it yet on-air. The main airing will be in Baseball Tonight prior to Sunday Night Baseball at 6 CT with the game starting at 7 CT on ESPN. Thanks for making this happen - the whole experience has been fantastic and all the credit is yours! I owe you big-time! Happy Father's Day! PS. Happy Birthday to Bridget!"
Posted by Rick Kaempfer at 3:00 PM

My lovely wife is celebrating a birthday today. I met her just a few weeks before her 21st birthday, and we started dating shortly after that.

This November we'll be married for twenty years.

And of course, she's put up with me.

Don't know how she did it. She must be a saint.

If you watch the pre-game show for the Cubs-Yankees game on ESPN on Sunday, you'll see my friend Bob Kruchten, along with his father and his son. ESPN contacted me a few weeks ago and asked me if I knew anyone that was a three-generation Cubs family.

My family doesn't qualify (dad didn't care about baseball), but I knew Bob would be perfect, so I recommended him. They interviewed him, and he'll be part of that show. I featured Bob on Just One Bad Century a few years ago telling some of his Cubs stories...

Gonna Use My Sidestep

When I read Bob Dearborn's The Olde Disc Jockey's Almanac this morning and saw that James Honeyman Scott from the Pretenders died on this day in 1982 (heart attack caused by cocaine), it made me think of the song "Brass in Pocket" because he is featured in that video.

In the early days of MTV it was one of their most played videos, and there was one line in that song that always drove me crazy. I could never understand what in the world Chrissie Hynde was singing after "Gonna use my arms, gonna use my legs, gonna use my style, gonna use my..."

I heard it many many times over the next 29 years, and every time I heard it I listened closely to try to figure out that next word. Today, I finally quenched my thirst for an answer by looking up the darn lyrics on the internet. The answer is: "Gonna use my sidestep."

Who says that? Anyway, now I can actually enjoy the song and the video again...

I just happened to look at the "Count Up Clock" at Just One Bad Century this morning (which is continually ticking), and noticed that we've reached a bit of a milestone today.

Today is the 37,500th day since the Cubs won the World Series.

Thought you'd like to know.
Posted by Rick Kaempfer at 11:11 AM

The Reason I Write

I just posted my weekly Suburban Dad column to Kim Strickland's City Mom blog at ChicagoNow. This week I reveal the reason I write...and yes, there is a Father's Day tie-in. 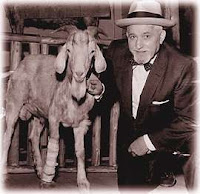 Yesterday before the game Cubs veterans handed out shirts to their teammates that said "F*** the Goat." It's their way of confronting the ridiculous "curse."

In one way I applaud them for this. But I would be remiss if I didn't point out that it's kind of pointless to address it this season. The curse hasn't even come up because the Cubs haven't even won three games in a row all year.
Posted by Rick Kaempfer at 9:00 AM

In Defense of the Cubs Fan

Dave Wischnowsky writes a nice defense of the Cubs fan at the CBS-2 website.

Dave and I share a pet peeve--people who blame Cubs fans for the losing. It's a preposterous and easily disprovable theory that should be put out to pasture for good.

Do some research into the years 1946-1966. The Cubs had twenty consecutive losing seasons despite the fans staying away. It didn't help, and do you know why? Because it's not the fault of the fans. That's why.

I hear this ridiculous "it's the fans fault" argument all the time from White Sox fans and sports talk radio. They point to the White Sox fans as some sort of model for creating a championship. They stayed away, and behold! The White Sox won it all in 2005. Yes they did. After 87 years.

By that logic, let's look at the Red Sox fans. They kept going to the ballpark despite never winning it, and behold! The Red Sox won it after 86 years! That proves that the fans have to keep coming, doesn't it?

Of course not. It's a stupid argument.

It's the fault of the people that put the teams together. Period.

And you simply can't blame them for that.
Posted by Rick Kaempfer at 10:02 AM

Here's the question: On this day in 1984 the Cubs acquired Rick Sutcliffe from the Cleveland Indians (along with Ron Hassey & George Frazier). Name two of the three players the Cubs gave up to get him.

UPDATE: We have a winner! Joe Cleaver was the first one to e-mail me the correct answer. He knew that the Cubs traded Joe Carter, Mel Hall & Don Schulze to get Sutcliffe.

Lots of people entered this week. Thanks for trying. We'll have another contest next Monday.
Posted by Rick Kaempfer at 9:38 AM

This week's Father Knows Nothing column has been posted at NWI Parent. It's a musical tribute to summer vacation from the perspective of the kids, and the parents that will be home with them.

Every weekend JOBC goes back in time to the last year the Cubs won the World Series.

This week in 1908, the Republican convention comes to Chicago and nominates William Howard Taft, while the Cubs play a weekend series at the Polo Grounds in front of record crowds.

This week in 1945, a commission led by Manhattan Project scientists warn President Truman not to use a nuclear bomb against Japan, and the Cubs win 5 out of 6 against the Reds and Cardinals.
Posted by Rick Kaempfer at 12:18 PM