Suburban Man: The Behavior Board

I don't want to alarm anyone by being too positive, but this has actually been a pretty good summer for my family.

Lots of quality time with the boys.

But most importantly, the number of fights in my house have decreased ten fold over the previous two summers. How have I achieved this miracle?

You may remember my solution for the constant fighting the past few years: The Fight Board. The Fight Board's modest goal was to have less than 50 fights for a summer. Unfortunately, this proved to be an unattainable goal. The best we did the last two years was 110 fights.

This year I decided not to bring back the fight board. I decided that the fight board had a few flaws. For one thing, Johnny was the one in the middle of every fight--so really I was punishing all three boys for the sins of one. For another thing, it was mainly a negative reinforcement tool...very short on incentives for positive behavior.

So this year, I adapted it slightly. The fight board was dismissed and replaced by the behavior board. I scanned it here so you could take a look at it. 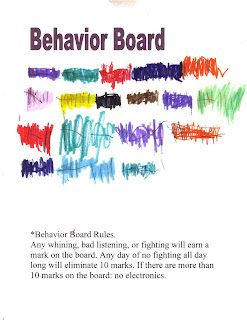 The behavior board* works the same way as the fight board in one way. Bad behavior is still punished by receiving a mark on the board. This year, however, it wasn't only fighting that received a mark. This year, I expanded the infractions so that it affected each boy equally. Sean had become a whiner...he whined whenever he didn't get his way. Tommy had become an incredibly bad listener...I had to say the same thing to him up to ten times before he heard me. So, whining and bad listening were added to the sins that merited a mark on the behavior board.

That way I was working on all three boys, not just Johnny. But since Johnny's infractions are always more severe (and potentially injury-causing or life-threatening), I added a caveat to the fighting punishment.

This year if the boys could go an entire day without fighting, I promised to eliminate ten marks from the board. That, combined with the punishment (More than ten marks on the board at any time means they can't use any electronics in the house including computer, video games, television, iPod, etc), did the trick.

The fighting has almost completely stopped. Oh sure there was that one time when Johnny slammed Sean's head into the car door because he wanted to get in the car first (I'm sure Mario Andretti was the same way as a child), and there was that other time that Johnny punched Tommy after he lost a game of chess (I'm sure Bobby Fisher was the same way), but the incidents that used to be a daily occurance in the old fight board days have all but disappeared.

When Johnny gets that look in his eyes, I remind him that he is blowing his chance to get ten marks taken off the board. If this doesn't slow down the rampaging stallion, his brothers step in to talk sense to him. Johnny has learned to go in his room, close the door, and blow off steam without injuring someone.

Sean's whining has also gotten muuuuuuuuch better. If the number of marks on the board is anywhere near ten, all I have to do is point at the board when he starts whining, and the whining ends immediately. Tommy is even listening better...although let's face it, this is a handy tool, but it's not a miracle worker. He's probably not actually listening better, he just has more than one person telling him things now. His brothers make sure he does what he's supposed to do when Dad starts getting that "this is the fifth time I'm telling you" tone in my voice.

It might not work for you, but the behavior board has made this the best summer of my stay-at-home-Dad career. And that's good enough for me.

*Sean is in charge of crossing off the ten marks on days they don't fight. As you can tell, he likes colorful markers.
Posted by Rick Kaempfer at 12:03 AM