On this day in 1959, Buddy Holly, Ritchie Valens and the Big Bopper died in a plane crash in Clear Lake Iowa. Buddy Holly was only 22 years old when he died.

Video: About day of the plane crash


Obviously, since I was born in 1963, I never met Buddy Holly. I have, however, met quite a few people who were important in Holly’s life. 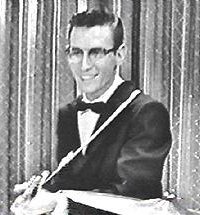 Among the people who joined us on the John Landecker Show over the years was the original guitarist of the Crickets, Niki Sullivan. He came to Chicago in the 90s as part of The Buddy Holly Story stage show. He was kind enough to get up real early one morning while he was in town to spend the better part of an hour on the John Landecker show.

We could have listened to Niki’s stories all day long. One of my favorite stories, because it involves two of the biggest stars in rock and roll history, was the story about the day Elvis Presley came to Lubbock, Texas. Buddy had won a contest as the best vocalist in Lubbock, and the prize was performing as opening act for Elvis. Niki was there that day too, and described what happened.

“Boy, Buddy was excited. You have to understand, it was 1955, and Buddy was already pretty well known in the Lubbock area at the time, but just hadn’t been able to break through nationally. Well since he was the opening act, he had access to the backstage area, and he approached Elvis—who had a couple of hit songs at the time--and asked Elvis if he had any advice. Elvis said sure, and invited Buddy into his dressing room. Well, he and Elvis went into that dressin’ room, and when Buddy came out a few minutes later—he was a different person. We asked him what they talked about, but he wouldn’t say. He just smiled. Whatever it was, and he never did tell us, after that night he was even more driven to succeed. It wasn’t too long after that he did.”

Recently, a home movie of Elvis backstage at that concert surfaced. Take a look at this clip, and you’ll see Buddy at the very end. This is supposedly the very first known footage of Elvis. 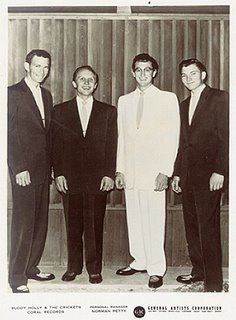 Niki was there for the recording of Buddy’s first big hit: “That’ll be the day.” He’s the other guy with the funny glasses playing the guitar in this video from those days.

He toured with the band the whole year of 1957, including a famous show at the Apollo Theatre. The black audience there that night had no idea what to think when they saw this group of good ol’ white boys, but the band won them over. It was a critical moment in Buddy Holly’s career, and was
featured in the movie The Buddy Holly Story starring Gary Busey. Unfortunately for Niki, it wasn’t portrayed accurately in the film because it shows only three men on stage that night. The Cricket they omitted was Niki Sullivan.

“It’s because I didn’t talk to the guy who wrote the first biography of Buddy. I was at the hospital because my kids were being born, so I wasn’t around when he came to town. Well, sure enough, when that book came out, I wasn’t a part of the story anymore.”

Sullivan was still part of the Crickets when they performed “Peggy Sue” on the Ed Sullivan Show. He told us what happened when Sullivan met Sullivan.

“He talked to Buddy before the song, but then during ‘Peggy Sue’, I heard him yell ‘Hey, Texas boy, do it!’ So I did a little dance. If you ever see that performance, watch the reaction of our bass player Joe.”

I never saw that performance until I listened back to the tape of our interview to write this column. In the 90s when we talked to Niki, YouTube didn't exist, and it wasn't so easy to track down some of that old TV video. Now you can, and here it is.

Niki Sullivan left the group just a few weeks after this performance in December of 1957, because he couldn’t take the rigors of touring anymore, and he wanted to be home with his family. He wasn’t part of the band for their biggest year of 1958, and he wasn’t part of Buddy’s tour in 1959. That turned out to be a lucky break.

Niki Sullivan died in his sleep in 2004, 45 years after his good friend Buddy Holly perished in that Clear Lake Iowa cornfield.

Stories like this one (and many, many more) are available via Allworth Press--in my How-To-Guide for producing radio shows (co-written with fellow radio producer John Swanson)

Click on this link to order your copy: The Radio Producer's Handbook

If you were reading this blog last year, you might have seen Bob Dearborn’s famous assessment of the Don McLean song “The Day the Music Died”, which was inspired by the death of Buddy Holly. If you missed it, click here.

I’ve since found a pretty good video of Don McLean singing the song. If you watch the visual images, you'll see that whoever put this together, probably read Dearborn’s analysis from 1972. Don McLean himself still refuses to explain it.

VIDEO: Leo Sayer and Justin Heyward of the Moody Blues doing a Buddy Holly medley
Posted by Rick Kaempfer at 12:03 AM


When the NFL announced that Prince was going to be the halftime entertainment for this year's Super Bowl, it made us wonder: Won't he ever graduate to a more age-appropriate rock-and-roll-elder name like "Duke" or "Baron" or "King?"

Of course, Prince is just the tip of the misnamed older rocker iceberg. What about the rockers that are ten, twenty, and thirty years older than him? Unfortunately for those guys, there isn't a historical precedence to guide them. Previous generations didn't have to deal with this problem. A generation ago, when a 60 or 70 or 80 year old man was rocking, it was in a chair. Now, it’s on a stage with an electric guitar.

Should old guys still be allowed to play rock and roll? Of course. However, they really need to think about how it looks, and how it sounds. It’s all about image and expectations.

The Beach Boys are a perfect example.

You must admit you judge the Beach Boys more harshly simply because of the word “boys” in their name. “Boys” should not be pushing 70. If they revised their name slightly, to say the Seaside Shuffleboarders, the expectations would be completely different.

When they perform as the Beach Boys, they're likely to hear: “Whoa, those dudes are old.”

When they perform as The Seaside Shuffleboarders, they're likely to hear: “Whoa, those old dudes can still rock. Rock on, old dudes!”

See how much better that is?

Bands like the Beach Boys are doomed if they don’t rename themselves.

Other bands are luckier. Bands like The Electric Prunes, The Grateful Dead, Gerry & the Pacemakers, The Kinks, and Limp Bizkit knew they would have to live with their names for a long time and planned ahead.

As a public service to the Baby Boomer rock and roll community, we’ve taken the liberty of revising the band names for others that weren’t as prescient…

No charge, fellas. You can thank us by continuing to rock in a more age-appropriate fashion.

I’m sure all of the fine readers of Half Empty can help out some more. Click on the “E-mail Me” link on the right, and send along your new names for bands in need.

The livelihood of an entire generation of musicians is at stake.

If you missed any previous Half Empty columns, click here: http://halfemptyarchive.blogspot.com
Posted by Rick Kaempfer at 12:04 AM


When our first boy Tommy was born, we were still in the delivery room when a vision flashed through my mind.

I was picturing my father, the engineer, painstakingly designing, weighing, and painting my Cub Scout Pinewood Derby car. Whenever I came near the car during his two week construction project, I was told not to touch it. He wouldn’t even let me look at it. As I looked down at my own little boy, I was overwhelmed with emotion.

The emotion was pity.

“This kid is screwed for the Pinewood Derby,” I said to Bridget.

She thought I was kidding, but in the days leading up to Tommy’s first Pinewood Derby seven years later, Bridget began to understand the gravity of my delivery room prediction.

My family doesn’t even allow me to carve the Thanksgiving turkey, but I was supposed to carve a car out of a block of wood? Are you kidding me? I can barely construct a paragraph. I can barely make a sandwich. I couldn’t fix a Chicago parking ticket if my last name was Daley.

To me, the most tragic part of the story was that the man who deserved community derision for his lack of traditional fathering skills (me) wasn’t going to be the victim. No sir. When that chunk of wood didn’t leave the starting gates, they weren’t going to call out my name to retrieve the car. They were going to call out Tommy’s.

I could picture that moment as clear as day when they handed me the Pinewood Derby box.

Bridget sensed I was a little stressed out about this whole thing. I don’t know if it was the sight of me curled up in a little ball that tipped her off, or whether it was my constant murmuring “I’m so sorry, Tommy. I’m so sorry, Tommy,” but she was like a guardian angel when she said the words that would change my parenting life forever.

“Could you use a little help?” she asked.

Could Joan of Arc have used a hose?

That’s when my own personal Joan of Arc took over. She got out the wood-thingy tools. She called her friends’ husbands and got tips for how to install the weights. She included Tommy in the process so he wouldn’t turn out like his own father. And when the two of them were done, they had created a totally satisfactory car.

She even brought along tools to Pinewood Derby night to make last second alterations if necessary. A few of the fathers commented to me about how good the car looked.

That was met with howls of laughter because they thought I was kidding. When they found out I wasn’t, it was met with slack-jawed disgust.

I didn’t care about their derision. I was just happy that Tommy’s car didn’t embarrass him. That horrible moment I feared never occurred.

Since that day, we’ve been to four Pinewood Derbies, and we’re going to another one this weekend. Last year my second son Johnny even won a prize for best design.

I still haven’t learned how to make one of those cars, but I have learned one thing beyond a reasonable doubt: I have the best wife in the world.

To read any of my other Suburban Man columns, click here: http://suburbanmanarchive.blogspot.com
Posted by Rick Kaempfer at 12:02 AM