Press and Praise for $everance

I wanted to thank everyone who has been so kind about my new novel "$everance." It is getting excellent reviews and notices across the country.

Next weekend I'll be in New York spreading the word further, but thanks to the following people and publications for helping me so far...

The Stan & Terry Show on WCKG (Podcast not yet available online)

"The Ministry of Truth" radio show on WHPK 88.5 FM

Bob Dearborn’s RadioNotes (Subscription only)
Posted by Rick Kaempfer at 12:15 AM


You remember the diorama, those mini landscapes in a shoebox that you were forced to build for school? Sadly, the technological revolution has all but killed our pal. Inexplicably, kids these days don’t enjoy pipe cleaners, crepe paper, glue and little plastic horses as much as we did. They still have to do dioramas, but they don’t revel in them because they’d rather do projects on their fancy-schmancy computers.

This has got to end. That’s why we’ve created a couple of easy to build dioramas that will make the diorama more relevant for today’s kids. Unplug the Play Stations, turn off the iPods and grab the kids, it’s time for some family fun Half Empty style.

Create Paris by inserting toothpick into marshmallow (the marshmallow is her head). Arrange and glue pipe cleaners to form a jail cell. Pose “Cellmate Barbie” behind Paris.

Ok, so you need to go get the computer, sorry. Download cutout of Tom Cruise. Print doll and glue him in the middle of the box. Fill box with empty prescription bottles. Inserting ax wielding Brooke Shields is optional.

Cover inside of box with orange crepe paper, to create an inferno effect. Tape “snowball” to bottom of the box.

If you have any other ideas, email us and we’ll post them. We bet you never knew we were so artistic. By the way, Rick is resting comfortably after slicing his finger off on the Tom Cruise doll.


If you missed any previous Half Empty columns, click here: http://halfemptyarchive.blogspot.com
Posted by Rick Kaempfer at 12:01 AM


I have a family of five. When it comes time for vacation, flying is no longer a realistic option. Until last year, I managed to maintain my sanity by confining all of our trips to the four nearest states.

Last year, however, we were invited to visit my aunt and uncle in Georgia.

“You know that means a 14-hour drive in the car, right?” I asked my pleading, begging children.

“And you won’t complain and whine and give me a 14-hour headache?” I asked.

“No!” they all promised.

I was weak. I consented.

I called up Spike Manton to get his opinion on the subject. Spike co-wrote a very touching play about the traditional family road rip called “Leaving Iowa.” It’s a subject he has studied for years.

I asked him if this was going to be the nightmare I remembered from the family vacations of my youth.

“Seatbelts have changed everything,” he answered. “From 1945 until 1980, the only thing that changed for the family vacation was the size of the paneling on the station wagon. Today’s kids will never know the insanity of hanging out the back window throwing fruit at the trucker behind you, and then climbing over three seats to ride on Dad’s lap to help him steer, all while traveling 65 mph down the highway. How can you have a real fight in the back seat if you are strapped in place like a hostage?”

“What about technology?” I asked.

“That too,” he said. “DVD players and Gameboys have forever replaced Slug Bug, the License Plate Game, and the Alphabet Game,” he said. “My nephews once arrived at my home at the end of a 16-hour road trip, and stayed in the car for an extra twenty minutes to finish a game on their Gameboy.”

That sounded like the solution for me. Seatbelts and technology were going to save me.

I wasn’t thinking about road trips when I opted not to take the DVD option on my minivan a few years ago. Whoops.

Luckily for me, they make portable players now, so I bought one with a big enough monitor for all three kids to see, and placed it in the best viewing location.

Among the other items packed into the minivan for this trip:
*Ten movies
*Three handheld video games (Gameboy DS)
*Three sets of headphones so Dad doesn’t have to hear anything
*A cooler full of drinks and food
*A backpack full of toys, books, and games for each boy
*My sister

I really thought we had everything covered.

We had three boys (ages 10, 7, & 3), and three adults. We had entertainment and food. We left at 3:00 in the morning so that they could sleep for the first three hours.

What could go wrong, right?

The biggest successes were thanks to two of the items we brought along with us: the DVD player and the headphones.

I highly recommend both of them.

The boys watched two Pokemon movies (which normally would have made my skin crawl), but I didn’t have to hear a thing except for an occasional laugh accompanied by a euphoric “OH MEOWTH! YOU CRACK ME UP!”

That was four hours of bliss.

This sounded like such a good idea. Unfortunately, the boys were so excited about vacation they didn’t sleep a wink. My three-year-old’s eyes were wide open the whole time. By 9:00 AM, I was the only one who wanted to sleep, and I was driving.


Mistake #2: Most toys/games/activities/books can cause carsickness

Somewhere in the middle of rural Georgia, I looked in the rearview mirror at my unbelievably pale eight-year-old. He was holding his stomach.

My wife sprinted into the backseat with a plastic baggie—but she was moments too late for the first gush. We pulled off at the next exit and added thirty minutes to our trip by cleaning off the seat and his pants, and finding something else for him to wear.


Mistake #3: Not realizing that even potty-trained 3- year-olds won’t “go” at public bathrooms.

On the way home we had to stop for gas about three hours away from home. All three boys were ordered to take care of business at the gas station. The two older boys did as they were told, but the youngster took one look at the bathroom and declared that he didn’t need to.

“Are you absolutely sure?” I asked.

I gambled that he was telling the truth. We were about an hour away from home when Sean’s stomach pains made him start crying out.

His painful cries let us know there was no way he could make it all the way home, so I pulled off the highway as soon as I could. The only semi-appropriate place near the exit was a Walgreen’s Pharmacy. When my wife and son finally emerged from Walgreen’s twenty minutes later, her annoyed expression told me the whole story.

“He promises he can make it home,” she said through gritted teeth.

“I know,” she conceded. She held up a pull-up diaper. “What do you think?”

It was our only choice. For the next thirty minutes we tried to tune out the grunting, groaning, whining, moaning child determined to prove he could make it home. When his natural cheerfulness suddenly returned, we knew the problem had passed.


When we pulled into the driveway, I heaved a sigh of relief. I know it sounds like it was horrible, but I don’t look at it that way. We survived. I consider any trip that involves only one vomit and one #2 emergency a rousing success.

I may even do it again someday.

When I drive my oldest son to college. 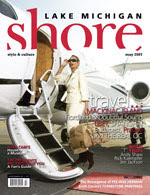