(Have you gotten your copy yet? Click here: www.encpress.com)

Severance merchandise is now available too. You simply must purchase one of these fashionable items: Severance Goodies

I still have quite a few interviews coming soon (July is going to be a very busy month), but thanks to the following people and publications for helping me spread the word about "$everance" so far...

Larry Potash and the Chicago Tribune

Dave Stern and "Half Empty"

Bob Dearborn’s RadioNotes (Subscription only)
Posted by Rick Kaempfer at 12:14 AM

Half Empty: Talking 'Bout Our Generation


There is a 97 % chance that if you’re talking to someone in our parent’s generation you’ll be called a sissy. We’re constantly being reminded that they had a World War to fight, polio to overcome and Russians to hate, while our pansy asses didn’t. Their generation was shaped by catastrophic world events and ours was shaped by Nintendo. Well, it’s time to set the record straight. We haven’t had it so easy, and we know a thing or two about world events. In fact, our lives have been more interesting than theirs and our hardships have been greater.

During a 1941 war rally in Berlin, Dave’s Mom shook the hand of Mussolini, while Adolph Hitler was 3 feet away. There were no words spoken between them and it’s doubtful the Duce even noticed. On the other hand, Rick met Cub great Jose Cardenal at Jewel, shook his hand and had a 2 minute conversation with him. In addition, Rick’s reasonably sure that Jim Hickman was in the produce section near by.

Rick’s father lived in a chicken coop during the war. Rick and Dave lived in squalor during college.

Rick’s father and his family spent the years immediately after the war living in a chicken coop in Austria. They had no heat, slept on the bare ground and worked hard on the farm in exchange for a weekly piece of meat. His father occasionally was given "fat sandwiches" for which he was forever grateful. Rick and Dave lived here (picture) in college. A picture says a thousand clucks. Besides, all we ate were Ramen noodles. They at least had eggs.


Rick’s great grandfather walked back to Romania from Russia after World War I--and his family had no idea if he was alive or dead for several years. Rick on occasion gets swollen ankles from a mild case of Elephantitis.

Rick would love to walk across war torn Europe but compression socks (shown here) are expensive. Without those socks, Rick's physical limitations won’t allow it. We’re not even mentioning Dave’s kidney stone a few years back.

There were two on, Jermaine Dye at the dish and Comcast blew a fuse. Thankfully, the outage lasted 15 seconds and all Dave missed was a couple of foul balls. Dave’s mom didn’t even have a TV, so she missed NOTHING!

During the war, even after severe air attacks, the German commuter train system would continue to run on time the next day. Dave took the CTA for three years during High School.

This one isn’t even close.


Dave and Rick’s families gave up everything they had and moved to a foreign country without even knowing the native language. Dave and Rick had to deal with permit parking.

Drive to a Lincoln Park bar on a Saturday night and try to park. It’s impossible. How hard was it to get to America? A couple of forms and poof you’re in steerage. We’re not even going to bring up Chicago’s impossible to understand Blue Bag recycling program.


We think it’s clear, that any pain the older generation had to endure, we've had to endure more. Take your little war and hardships and walk a while in our shoes. Oh and as for Rick's great-grandfather, try doing your little European walking tour in Rick’s orthopedic shoes some time. We dare you!

If you missed any previous Half Empty columns, click here: http://halfemptyarchive.blogspot.com
Posted by Rick Kaempfer at 12:07 AM

Father's Day is this Sunday, and this year it happens to fall on my wife Bridget's 40th birthday. I think it's safe to say that we won't be celebrating Father's Day in my house. I really don't mind. Father's Day has always been a bittersweet holiday for me anyway, as I explained last year in the following piece. I hope you don't mind if I rerun it this year.


I would like to take this opportunity to thank someone who often comes to mind when I think of my own father: Mary Ann Childers.

Why do I think of the local Chicago news anchor when I think of my Dad?

It's a very odd story. I was the producer of the Steve and Garry show on WLUP, and we did a very special Christmas show one year--a full reading of the stage version of "A Christmas Carol" starring many local celebrities.

Among the celebrities present that day: Mary Ann Childers.

I don't remember what part Mary Ann played, but I remember that I cornered her backstage and asked her to do me a big favor. I told her that my father had a thing for her. He didn't say it was time to watch the news--he said it was time to watch Mary Ann. I asked if she would mind sending me an autographed picture of herself for Dad.

She seemed very flattered, but I really didn't expect her to do it. I figured she was a busy person and this was such a low priority that she probably wouldn't get around to it. That's probably why I was blown away when she sent me her promo picture with a personal note to my Dad saying... "It was a pleasure working with your son, Rick." The picture itself says "To Eckhard--Warmest Wishes for Christmas 1988. Mary Ann Childers."

I'll never forget how excited Dad was when he opened my present to him on Christmas Eve that year. I captured it on film... 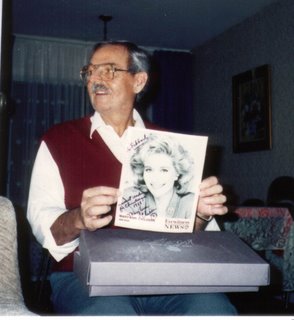 Dad died six months later at the age of 54.

After he died I went to his office to clean out his things, and there she was, right in the middle of his desk: Mary Ann Childers. His co-workers told me that he joked with them about this picture all the time, saying that Mary Ann was his secret girlfriend.

Sunday is Father's Day. It's always a rough weekend for me. For the first twenty five years of my life, Father's Day weekend was a tribute to Dad. (And not just because it was Father's Day--it was his birthday too.) So, even now--seventeen years later, I struggle to enjoy Father's Day. I can't help thinking of Dad--and how much I miss him.

When I don't want my sadness to ruin Father's Day for my kids, all I have to do is think of Mary Ann Childers. I remember how excited Dad was to get this picture from his "girlfriend," and it never fails to bring a smile to my face.

One small gesture from you gave my Dad six months of enjoyment...and gave me seventeen years of comfort.

I'll never be able to repay you for that.
Posted by Rick Kaempfer at 12:03 AM

Jokes for a Monday Morning

1. Things a father will never say. (Contributed by "D")

"Can you turn up that music?"

"I LOVE your tattoo. We should both get new ones."

"Here, you take the remote."

Get him a computer... 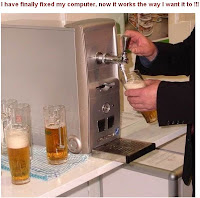 3. The next "Survivor" show. Contributed by "H"

Each kid plays 2 sports and either takes music or dance classes and there is no access to fast food.

Each man must take care of his 4 kids, keep his assigned home clean, correct all homework, complete science projects, cook, do laundry, etc.

The men only have access to TV when the kids are asleep and all chores are done.

There is only 1 TV between them and no remote.

The men must shave their legs and wear make-up daily, which they must apply themselves either while driving or while making 4 lunches.

They must attend weekly PTA meetings, clean up after their sick children at 3:00 AM, make an Indian hut model with 6 toothpicks, a tortilla, and 1 marker.

They must get a 4 year old to eat a serving of peas.

The kids get to vote them off based on performance.

The winner gets to go back to work.
Posted by Rick Kaempfer at 12:03 AM