This weekend on Chicago Radio Spotlight I talk to WGN Newsman Rob Hart. He's a reporter and an anchor and he shares some of the highlights of his career covering the news in Chicago.

Read the whole interview here.
Posted by Rick Kaempfer at 9:37 AM

This week I wrote about Charlie Root, and I got a few interesting e-mails about it, including this one...

Saw your great entry about Charlie Root and so did Charlie's daughter, Della, who is 90. Would love if you could plug my web site and new book about Root that will be out in two weeks. For more details, http://rootforthecubs.com

Consider it done, Roger. Good luck on the book. Charlie will also be part of "Cubs through History" here at Just One Bad Century on Monday.
Posted by Rick Kaempfer at 8:47 AM

This seems appropriate during the week of St. Patrick's Day...

Posted by Rick Kaempfer at 8:36 AM

I just re-read the spring break story in the post below, and a portion of it made me realize that the apple doesn't fall far from the tree. In the story, my son Johnny gets car sick and loses it all over the back seat.

Last night I went to a wake of a neighbor I haven't seen in years. I didn't know the deceased that well, but I knew his younger sister. She was just a few years older than me and we used to play together when we were kids. She introduced me to her teenage daughter at the wake last night as her former next-door neighbor.

Her daughter said..."Wait a second! Are you the kid who used to vomit all the time?"

Yup, that's me. I think they still have "Don't Let This Boy on this Ride" posters with my picture on it in the local carnival hall of fame.

You just never know what's going to happen, do you? You go to a wake expecting a somber atmosphere and instead you get a story that your kids are going to tell to every person they meet for the rest of their lives.
Posted by Rick Kaempfer at 7:44 AM

Email ThisBlogThis!Share to TwitterShare to FacebookShare to Pinterest
Labels: Father Knows Nothing, Kaempfers

My kids begin their spring break later today, and this year we're just staying home and relaxing. A few years ago we ventured down to Georgia for a spring break adventure. I wrote about that road trip for SHORE Magazine. You can read the gruesome details here.
Posted by Rick Kaempfer at 7:36 AM

I wouldn't want to see Elton throw a pitch, but Crane Kenney makes an interesting point. From this morning's Chicago Tribune...

"Not only will the Cubs host three concerts and open a new indoor-outdoor café in time for Opening Day, but there are more revenue-generating innovations to come.

"It's strange, because you see these people who are opposed to the concerts and they're Cub fans," Cubs Chairman Crane Kenney said Wednesday in a wide-ranging interview.

"This is going to sound odd, but Elton John's going to help us win some ballgames," Kenney said. "The CBOE [seat] auction last year paid for Rich Harden. The 'Road to Wrigley' game sponsored our Asian scouting operation.

"That's the way, from the business end, we look at these things. All these elements really help our business move forward. My view is if you're a Cub fan, you should enjoy the concerts whether you're an Elton John fan or not."

There's a photo of the cafe construction at the link above...
Posted by Rick Kaempfer at 9:36 AM

I would like to thank everyone who posted a blurb about $everance on their Facebook page. I'm going to try to thank you all personally, but there were so many people who did it that I'm afraid I might miss one or two, so I'd like to make one big public thank you too.

Over the past few weeks a few of my former interview subjects have celebrated birthdays. It seems like a good time to revisit them. Happy birthday to...

From this morning's newswires...

The Chicago Cubs will retire the No. 31 worn by both Ferguson Jenkins and Greg Maddux. The two star right-handed pitchers will be honored May 3 before a game against Florida at Wrigley Field. It will be the fifth number retired by the Cubs, joining No. 14 (Ernie Banks), No. 26 (Billy Williams), No. 10 (Ron Santo) and No. 23 (Ryne Sandberg).

Jenkins, elected to the Hall of Fame in 1991, and Maddux, who won 355 games before retiring in December, are the first Cubs pitchers to have their numbers retired. Jenkins retired before the 1984 season. When Maddux broke in with the Cubs two years later, he was given No. 31.

"Being 20 years old at the time the last thing I was going to do was complain about my number. I was just happy to be there," Maddux said of the No. 31. "I thought that was pretty cool. They gave me Fergie's number. I knew he was one of the best pitchers to ever play for the Cubs and for baseball period."

Turns out Maddux became one of the greatest, too.

I guess they had to wait until Maddux retired, but the honor is long overdue for Fergie. These are two of the classiest pitchers to ever put on a major league uniform. It's well deserved.

I haven't talked about $everance on this blog for awhile, but it's still going strong. Just today we added a feature on the ENC Press site where people could share $everance on their Facebook pages. If you liked the book, and would like to share it with people you know, click here, look for the little facebook logo, and you can add it to your Facebook page. Any help you can give me would be greatly appreciated.

I'm doing a few book club appearances this month promoting the book too. It's funny, but with the recent economic collapse, suddenly my railing against Wall Street practices is looking prescient. Who knew?
Posted by Rick Kaempfer at 5:39 PM

Kelly is the proprietor of an Irish bar in New York City . In order to increase sales, she decides to allow her loyal customers - most of whom are unemployed alcoholics - to drink now but pay later. She keeps track of the drinks consumed on a ledger (thereby granting the customers loans).

Word gets around and as a result increasing numbers of customers flood into Kelly's bar.

Taking advantage of her customers' freedom from immediate payment constraints, Kelly increases her prices for wine and beer, the most-consumed beverages. Her sales volume increases massively.

He sees no reason for undue concern because he has the promissory notes of Kelly's customers as collateral.

At the bank's corporate headquarters, expert bankers transform these customer assets into DRINKBONDS, ALKBONDS and PUKEBONDS.

These securities are then sold and traded on markets worldwide.
No one really understands what these abbreviations mean and how thesecurities are guaranteed.

One day, although the prices are still climbing, a risk manager of the bank, (subsequently fired for his realism), decided that the time has come to start demanding payment from Kelly for the debts incurred by the drinkers at her bar.

Unfortunately Kelly's customers cannot pay back any of their debts to Kelly.

Kelly cannot fulfill her loan obligations to the bank and claims bankruptcy.

DRINKBOND and ALKBOND drop in price by 95 %. PUKEBOND performs better, stabilizing in price after dropping by only 80%.

The suppliers of Kelly's bar, having granted her generous payment terms and also having invested in the securities are faced with a new and desperate situation. Her wine supplier claims bankruptcy and her beer supplier is taken over by a competitor.

The bank is saved by the Government following dramatic round-the-clock consultations by leaders from the governing political parties. They came up with a miraculous rescue plan that saved the bank.

The funds required for this massive rescue are obtained by levying a new income tax on all the non-drinkers.
Posted by Rick Kaempfer at 2:34 PM

The World Baseball Classic is being played at Hiram Bithorn Stadium this week. Not many Cubs fans realize that Hi Bithorn was a Cubs player. Read his tragic story here. Today would have been his 93rd birthday.
Posted by Rick Kaempfer at 9:42 AM 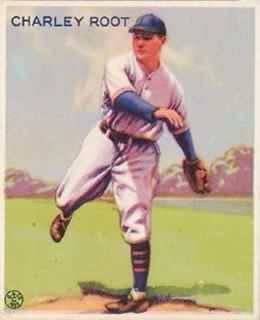 Charlie Root was the pitcher who served up the supposed called shot by Babe Ruth, and he was born on this day in 1899.

He still holds the record for most career victories by a Cubs pitcher (201).

Next Monday in "Cubs through History" you'll learn a little bit about what Charlie liked to do for fun. Be sure to check that out.
Posted by Rick Kaempfer at 10:57 AM

The things you don't say to your wife

Posted by Rick Kaempfer at 7:36 AM

I just posted my newest Father Knows Nothing column at NWI Parent. It's called "Tell us a story, Dad." You can read it here.
Posted by Rick Kaempfer at 9:21 AM