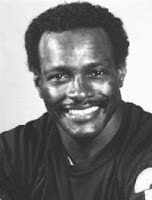 Walter Payton was one of the greatest football players of all-time; a member of the NFL Hall of Fame. When he retired in 1987 he held the record for most rushing yards in NFL History. If he were still alive, he would have turned 53 years old this week.


Walter Payton was simply my all-time favorite football player. Growing up in Chicago as a Bears fan, there was no one even close.

I didn’t actually meet him in person, however, until a few years after he retired from the game. It was 1993, and our radio station (WJMK) was doing a remote broadcast from Carson’s, a large (since departed) department store in downtown Chicago. The sponsored remote was to promote the new line of throwback football jerseys for sale, and three all-time NFL greats were on hand to sign autographs; Dick Butkus, Ray Nitschke, and Walter Payton.

We were excited about the possibilities about doing a show with these three guys, but discovered quickly that it was going to be a little different than we were told. The players made it quite clear to us that they didn’t consider participating in a radio show part of their paid appearance. As far as they were concerned, they were strictly there to sign autographs.

Every time John Landecker put the microphone in front of them, he got nothing. Dick Butkus was particularly nasty about it. He looked like he was going to punch John. Ray Nitschke, who had previously been on our show and seemed to be a pretty cooperative guy under other circumstances, merely grunted, or gave one or two word answers to John’s questions.

Walter Payton treated the appearance of the microphone as an excuse to pinch John. It got a good laugh in the store, but it wasn’t exactly spellbinding radio. In fact, we were beginning to think this was going to go down as one of our all-time worst broadcasts.

Luckily, just as were about to throw in the towel, John noticed that while the Sam Cooke song “Bring it on home” was playing on the radio, Walter Payton was singing along.

John grabbed his live microphone, and said. “Stop the music. Stop it for a second.”

The board operator back at the station did as he was told. John continued. “Good. Now start the Sam Cooke song again. This time we’ve got a special treat for you. This time Sam Cooke will be accompanied on lead vocals by Chicago Bears Hall of Famer Walter Payton.”

The song started again, and sure enough, Walter Payton grabbed the microphone from John and really got into it, belting out Sam Cooke with all of his heart.

He got a standing ovation in the store, but more importantly for us, his singing went out over the airwaves.

It was such a big hit, in fact, we eventually released Walter’s version of the song on our sixth Landecker & the Legends CD, 20th Century Hits and Bits.
Posted by Rick Kaempfer at 12:02 AM