Every Monday stop by for jokes, links to stories you might have missed, amusing photos and video, and more. Contributions and suggestions are welcome and encouraged. Click on the "Email Me" link on the right to contribute.

Joke of the Week:
Guns & Doctors. Contributed by my Republican friend "A."

Now think about this:

So, statistically, doctors are approximately 9,000 times more dangerous than gun owners. Remember, 'Guns don't kill people, doctors do.' FACT: NOT EVERYONE HAS A GUN, BUT ALMOST EVERYONE HAS AT LEAST ONE DOCTOR. Please alert your friends to this alarming threat.We must ban doctors before this gets completely out of hand!!!!! Out of concern for the public at large, I withheld the statistics on lawyers for fear the shock would cause people to panic and seek medical attention!

1. Drew Peterson's lawyer reaches new low
(You won't believe his response to an angry e-mail. I'm pretty unshockable, but this even shocked me.)


2. Drew Peterson's secret admirer
(See if you can guess what made me laugh in this story.)

3. A GOP operative creates a new anti-Hillary group.
(Another shocking story. You won't believe the acronym of this group. I'm not exactly a Hillary fan, but these guys--who are pretty mainstream Republican fundraisers--are going waaaay over the line.)

VIDEO: One of Heath Ledger's last interviews, talking about upcoming Batman movie
(He was only 28)

Picture of the week: Contributed by many. Best gravestone ever... 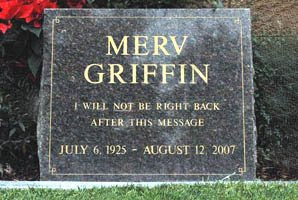 Regarding "Just One Bad Century"

"I heard about the release of this website on WGN's "The Noon Show," a few days ago.
It. is. PHENOMENAL!
Great information, excellent layout, amazing pictures...very well done - I'm telling everybody I know about this site. Let's bring it home this year! GO CUBS!"
--K

"Great interview with Bob Sirott... I was sitting here going: 'Now that's a familiar voice???' I really like the website...I'll forward it onto some friends...including the ones that have an appreciation for fine mustaches."
--J

"Can I just tell you how much I love this website? I can’t wait for the souvenir stand to open. I might have to use your logo as a new Cubs tattoo (to add to the one I already have)."
--A

Rick responds: We're getting there on the Souvenir Shop. Hang in there. Also, for those of you who didn't hear my interviews with Sirott or Steve Cochran, you can click here to hear them.

358 days until we get a brand new President
Posted by Rick Kaempfer at 12:03 AM