Every Monday stop by for jokes, links to stories you might have missed, amusing photos and video, and more. Contributions and suggestions are welcome and encouraged. Click on the "Email Me" link on the right to contribute.

Joke of the Week: Contributed by "B"

And then the fight started....

My wife sat down on the couch next to me as I was flipping channels. She
asked, "What's on TV?"

My wife was hinting about what she wanted for our upcoming anniversary. She
said, "I want something shiny that goes from 0 to 150 in about 3
seconds."

I bought her a scale.


And then the fight started.

After retiring, I went to the Social Security office to apply for Social
Security. The woman behind the counter asked me for my driver's
license to verify my age. I looked in my pockets and realized I had
left my wallet at home.

I told the woman that I was very sorry, but I would have to go home and come back later.

The woman said, 'Unbutton your shirt'. So I opened my shirt revealing
my curly silver hair.

She said, 'That silver hair on your chest is proof enough for me' and
she processed my Social Security application.

When I got home, I excitedly told my wife about my experience at the
Social Security office.

She said, 'you should have dropped your pants. You might have gotten
disability, too.'

My wife and I were sitting at a table at my high school reunion, and I
kept staring at a drunken lady swigging her drink as she sat alone at
nearby table.

'Yes,' I sighed, 'She's my old girlfriend. I understand she
took to drinking right
after we split up those many years ago, and I hear she
hasn't been sober since.'

'My God!' says my wife, 'who would think a person could go on
celebrating that long?'

I rear-ended a car this morning. So, there we were alongside the road
and slowly the other driver got out of his car. You know how sometimes
you just get soooo stressed and little things just seem funny?

He stormed over to my car, looked up at me, and shouted, 'I AM NOT
HAPPY!'

So, I looked down at him and said, 'Well, then which one are you?'


1. Man suspected of sausage and spice attack set free
(He rubbed spices in the face of one man, and hit another man with an eight inch sausage. Sounds like a typical night at George Michael's house.)

3. Mom allegedly uses daughter's ID to be cheerleader
(The other girls got suspicious in the locker room when she complained of hot flashes.)

4. Joe Biden's whoopsie-daisy
(Warning: This is hard to watch if you feel empathy for public figures. If not, you'll love it.)

5. To infinity and beyond
(This is quite a feel-good story)

Video of the week: Contributed by "D". Damon Wayan's colonoscopy

Photo of the week: Contributed by "B". Separated at Birth 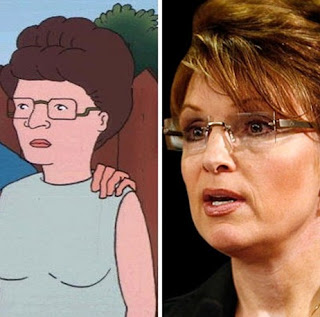 Regarding Suburban Man: "Wait til your father gets home"

"Can we talk about weeds? I used to believe that my Father had kids just so he had someone to pick weeds every Summer weekend. My kids will do anything to avoid picking weeds.."
--J

Regarding "Just One Bad Century"

"You gotta have faith" --those are not just the words of POP ICON (and part time men's room attendant) George Michael. Do you attend Church? Maybe it's time you started."
--M
Posted by Rick Kaempfer at 12:03 AM