I got the following e-mail and picture the other day... 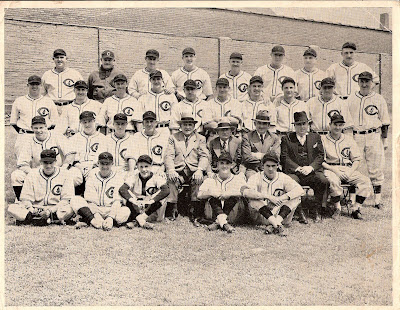 "Rick, my name is Keith Iverson out in Rockford. I have a old Cub’s team photo ( 8”X10”) from I would guess the 1930’s - sometime. ?? I would like to confirm the year of this photo, and also see who each player might have been. Can you help me out, or direct me to a web site where such info might be available. Thanks for any help you can give."


This was my response to Keith after spending a little time with the picture. If you have any further info, let me know...

Clue #4--Charlie Grimm is sitting next to the guys in the suits (on the left of them), which means he was probably the manager. He became manager in 1932 and left in 1938.

Clue #5--Rogers Hornsby is not in the picture. He was the manager until mid-season in 1932. 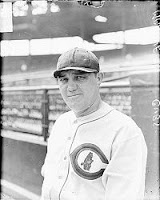 Clue #7--Phillip Wrigley is not in the picture. He inherited the team from his Dad in 1932, but didn't take over the day-to-day operations until 1935. I don't think his father is in the picture either, although the fattest guy in the suit does resemble him slightly. (Doubtful, however, because he died in January of 1932, and as I mentioned, Rogers Hornsby and Hack Wilson would have been in the 1931 Cubs picture, and Babe Herman and Babe Phelps were not on the team in 1932.)

All the best,
Rick Kaempfer
Editor-in-Chief
www.justonebadcentury.com
Posted by Rick Kaempfer at 7:58 AM